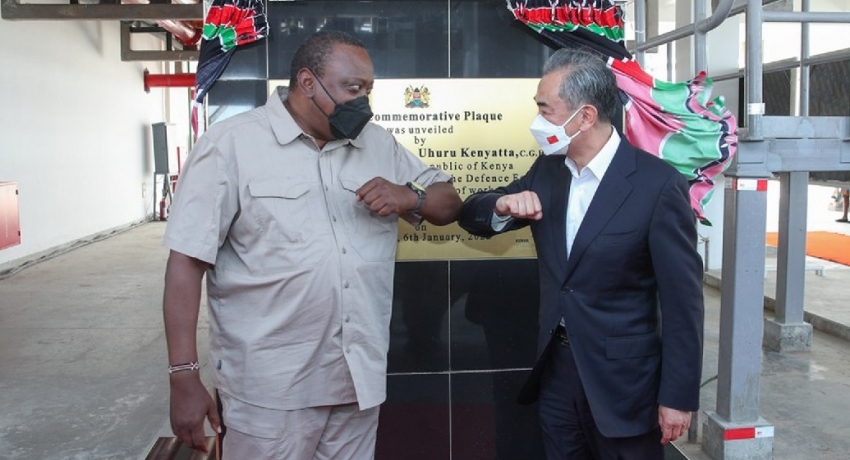 COLOMBO (News 1st); “History is the fairest judge, facts are the most powerful testimony. Our brothers and sisters in Kenya and other African countries know who is Africa’s true friend and partner,” said Chinese State Councilor and Foreign Minister Wang Yi during his visit to Kenya on Thursday (06).

Xinhua net reports that Wang made the remarks while attending a ceremony with Kenyan President Uhuru Kenyatta to witness the completion of the Chinese-built Kipevu Oil Terminal (KOT) upon invitation.

The State Councilor and the Chinese Foreign Minister is also due to visit Sri Lanka on Saturday (08) as well.

Wang congratulated Kenya on accomplishing another major infrastructure project under the leadership of President Kenyatta, adding that the KOT project will benefit the country and the region.

“What we witness here today is the enduring sincere friendship between China and Africa, the gratifying achievement of the Belt and Road Initiative, and the bright prospect of China and Africa jointly pursuing modernization,” Wang said.

Wang said that more than 600 years ago, Chinese navigator Zheng He led one of the world’s most powerful fleets to Mombasa three times, bringing friendship and trust to Africa, not colonization and slavery.

Six hundred years later, Chinese engineers and technicians followed Zheng’s footsteps to Africa and the coastal city of Mombasa, where they built the best roads, railways and today the best oil and gas facilities for local people, Wang said.

“History is the fairest judge, facts are the most powerful testimony. Our brothers and sisters in Kenya and other African countries know who is Africa’s true friend and partner,” Wang added.

The KOT project is highly technical and difficult to construct, Wang said, noting that a world-class offshore platform has been adopted to effectively protect the marine environment and create a large number of local jobs and business opportunities.

All this shows that the Belt and Road cooperation between China and Africa is moving forward in a high-standard, sustainable and people-friendly way, following the goals set by President Xi Jinping and African leaders, he said.

Wang said that the completion of the oil terminal is an important step for Kenya to accelerate its industrialization.

Modernization is not achieved by slogans but actions, he said, noting that China and Africa have jointly built over 10,000 km of railways, nearly 100,000 km of roads, nearly 1,000 bridges, nearly 100 ports and a large number of hospitals and schools.

“China and Africa have become steadfast allies and reliable partners on the path to modernization. As long as we continue to work together, we will surely blaze a new trail for developing countries to achieve modernization,” Wang said.

Every country should be entitled to development and progress, and every nation should have the opportunity to realize their dreams, Wang said.

The 21st century is not only a century for Asia but also for Africa, he said, adding that the 2.7 billion Chinese and African people, working together to achieve modernization, will constitute the most glorious chapter in the history of human civilization.

Wang said China has always called on the international community to pay more attention to Africa and welcomes other countries, especially developed countries, to actively participate in Africa’s development process.

Africa should be a big stage for international cooperation, not an arena for competition among major countries, Wang said. “If there is any competition, it should be a competition of who has done more for Africa, who has contributed more to Africa, and who has worked more for the African people.”

“China is ready to join hands with all countries with goodwill towards Africa in making new contributions to an even brighter future for Africa,” Wang said.