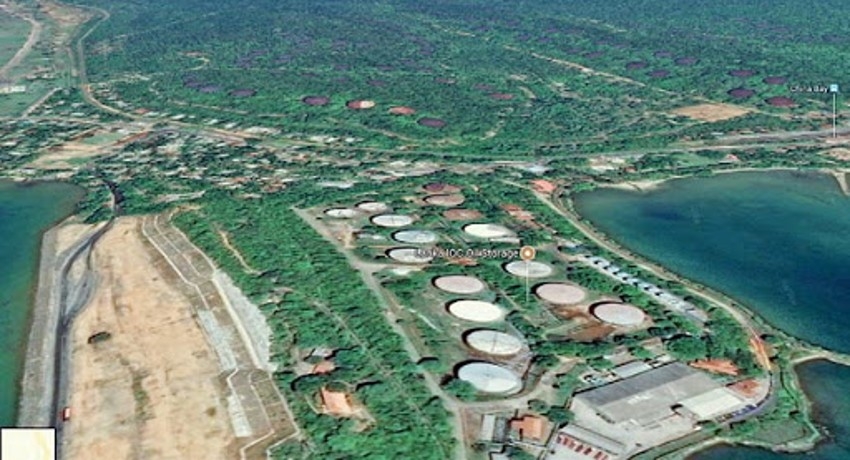 Energy Minister Udaya Gammanpilla confirmed earlier that the Cabinet of Ministers had approved the proposal and an agreement with India would be signed within the month. The Oil Tank Farm, is situated adjacent to the Trincomalee Port, considered to be the preeminent natural harbour in the world. Experts point out that this, in addition to the strategically important geopolitical positioning, makes it vital in Sri Lankas interest that the port remains within the total control of Sri Lanka.

But while the 99 remaining oil tanks are the topic of conversation and controversy, a little-known fact is that the original farm consisted of a total of 101 tanks.

In 1942, a Japanese WWII raid on then Ceylon, destroyed two tanks, leaving behind 99. The raid, often called the ‘April Raids’, is an often, overlooked part of WWII history. Described as “the most dangerous moment of the war” by Sir Winston Churchill himself, the ‘raid’ and its significance highlight the importance of the Trinco Oil Tank Farm beyond its service and use as a refilling facility.

Why did Japan decide to carry out such an unprovoked and cold-blooded attack, especially against a nation she was not technically at war with, is a question that requires careful thought, especially given the context of this modern-day agreement between India and Sri Lanka. Of the myriad targets that Japan would have considered in 1942, it decided on Colombo and Trincomalee for very specific reasons. Had the raid succeeded, it could have shifted the tide of the war and history could have been very different.

As much as the conversation is on the 99 Tanks that will be part of the Indo-Sri Lanka Agreement, the two tanks that were destroyed by the Japanese some 80 years ago, conveys an important lesson; that short-term ‘transactions’ involving national resources with geopolitically strategic importance will invariably have long-term implications and could drag a nation into a tug-of-war it has no benefit in being involved in.

The vital importance of the Trincomalee Harbour, which can birth the world’s largest vessels including submarines, must be evaluated not only as an investment opportunity but rather as a key competitive advantage that Sri Lanka must commit to retain total control over. If Sri Lanka gets this wrong, it may not be able to avoid the repercussions of the Game of Thrones being played out between nations that have their own interests at heart.

The Two Destroyed Oil Tanks in Trincomalee, serve as a poignant reminder of this.

Ref: ‘The Most Dangerous Moment of the War’, John Clancy (Casemate Publishers, 2015)