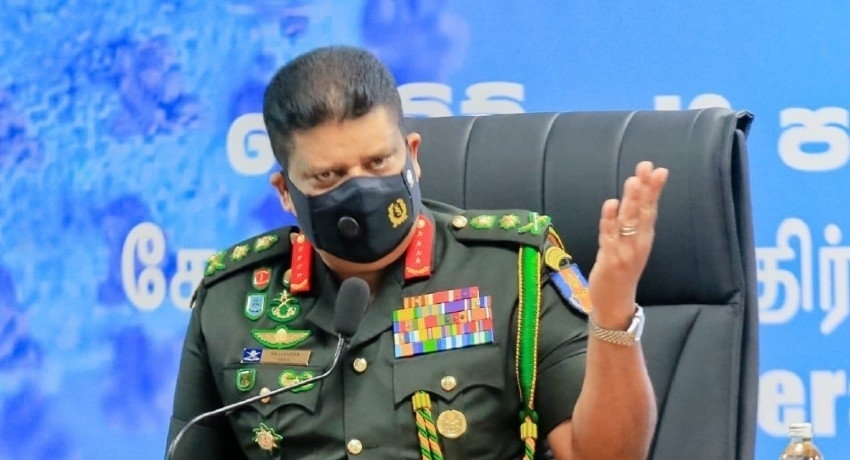 COLOMBO (News 1st); The National Operations Centre for Prevention of COVID-19 Outbreak (NOCPCO) will be converted to an Operations Center for Green Agriculture with effect from Thursday (9) announced Army Commander General Shavendra Silva.

“With effect from today (9), the National Operations Centre for Prevention of COVID-19 Outbreak (NOCPCO) will disintegrate from pandemic related activities,” announced the Army Commander, noting that the NOCPO was established on the 16th of March 2020 and has been in operation for almost two years.

“We, together as a team have been tirelessly to control the global pandemic in our country. Led by the Minister and Director-General of Health, medical and public care staff will be able to further improve the control of the pandemic in the future,” he said.

The NOCPCO will convert as the National Operations Center for Green Agriculture, he announced.

The Army Chief thanked the members of the main NOCPCO committee, the panel of experts and working groups, doctors and pre-intern doctors, commanders of the three armed forces, and the personnel and Sri Lanka Police.

He also thanked the media for its role in reaching the people to control the pandemic, contributing air time for these efforts.

The National Operation Centre for Prevention of COVID-19 Outbreak (NOCPCO) at Rajagriya, hitherto remained functional, headed by General Shavendra Silva, Chief of Defence and Commander of the Army as the central umbrella organization that coordinated all preventive, control, quarantine and all other related pandemic operations on the instructions given by HE the President will cease its functions upon completion of near 1 year and nine months after its inauguration on 16 March 2020.

Announcing its culmination of COVID-19 operations, General Shavendra Silva, Head, NOCPCO this afternoon (8) had the last meeting session of the NOCPCO Task Force, attended by its members both physically and virtually including the Director-General of Health Services, Dr Asela Gunawardene.

” We together as a team have been working tirelessly nearly for 2 years to control a global pandemic in our country as members of a team, led by H.E the President and the government of Sri Lanka. We experienced three main outbreaks or waves during this period and that team work was entrusted with enormous challenges to protect the citizens of this great country from an invisible threat. We worked together as the main committee, expert panel and as different working groups to formulate strategies, to implement different plans and modalities to control this pandemic and those efforts never allowed people of this great country to experience a crisis situation, despite many challenges.”

“Strategies and modalities proposed by this group resulted in effective patient management, contact tracing, quarantining as well as vaccination of our entire population and the country is fully opened now, with some limited restrictions. I am confident that the Ministry of Health, medical and public healthcare staff will be able to further improve the control work of the pandemic in future, and to enter into the year 2022 as a COVID free Sri Lanka.”

” From today onwards, this operation centre will start contributing to another mammoth national effort while 1906 hotline and 1904 SMS service will be taken over by the Ministry of Health with the integrated patient management system and a new hotline would come into effect for the new operation centre. We have already compiled National Operations Centre’s (NOCPCO) experiences to a document, and the final version of this document will be published within next couple of days.”

“I, as the Head of the National Operations Centre, take this opportunity to extend my deepest gratitude for the members of the main committee, members of the independent expert panel and members of the different working groups as well as doctors and pre-intern doctors who worked in the NOCPCO for their invaluable contribution to this great nation. Similarly, there were a number of professionals, intellectuals, government and private sector officials, individuals, groups of individuals who came forward voluntarily to assist us in multiple ways and avenues. I am very much grateful to all of them for their contributions. Finally, I highly appreciate and commend the contribution and the support extended by the medical and public health staff at all levels, members of the tri forces, Police, members of the intelligence services, and the citizens of this great nation in assisting the NOCPCO to fight this pandemic, ” General Shavendra Silva concluded.