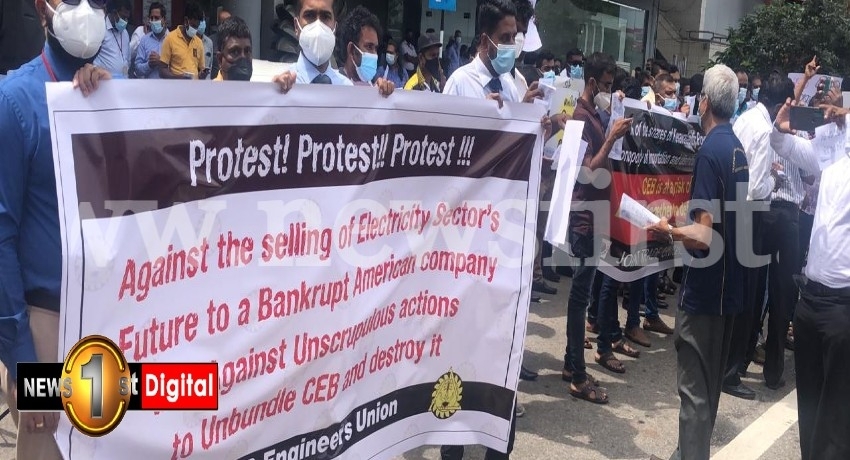 COLOMBO (News 1st); Electricity Trade Unions said they will announce the date for their strike in due course.

Ceylon Electricity Board (CEB) United Trade Union Alliance Convener Ranjan Jayalal during a protest on Wednesday (3) warned that if there is a disruption to the supply of power, during their strike, the government should be held responsible.

“We tell the people not to show force against us but against the local politicians,” said Ranjan Jayalal.

Trade Unions protested in Colombo on Wednesday (4) against the agreement reached with US-based New Fortress Energy Inc, for the transfer of shares of the Yugadhanavi Power Plant.

“The CEB Chairman said the strike will be viewed as an anti-government act. But, where were they when the government secretly signed the agreement, keeping the cabinet and allies parties in the dark,” said Jayalala.

Ceylon Electricity Board Engineers’ Union President Saumya Kumarawadu warned the government to immediately withdraw the controversial LNG agreement, if not there will be consequences.

New Fortress Energy Inc. announced on 22nd September that they have executed a definitive agreement for New Fortress’ investment in West Coast Power Limited (“WCP”), the owner of the 310 MW Yugadanavi Power Plant based in Colombo, along with the rights to develop a new LNG Terminal off the coast of Colombo, the capital city.

New Fortress will acquire a 40% ownership stake in WCP and plans to build an offshore liquified natural gas (LNG) receiving, storage, and regasification terminal located off the coast of Colombo.