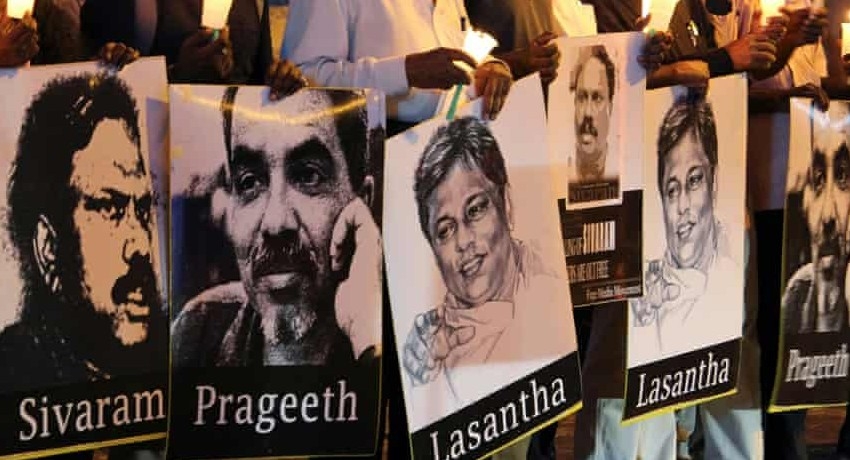 Journalism is not for the faint-hearted.

Journalists are often looked down upon, frowned upon, and criticized. Everybody will have an opinion about journalism.

But the heart of true journalism is solidly placed within the foundation of the Truth.

The single-minded pursuit of the truth, against all odds.
And bringing that truth to the people.

Protecting YOUR, right to know. Your, right to the Truth.

As the world recognizes the importance of protecting journalists and takes a stand against crimes against journalists, it is important to remember the voices that were silenced in Sri Lanka as well.

The Editor of the Sunday Leader, Lasantha Wickramatunga was killed in broad daylight on the 8th of January 2009.

On the 22nd of May 2008, newspaper editor Keith Noyahr was abducted and tortured.

What action has been taken against those responsible?

Journalist Prageeth Eknaligoda went missing on the 24th of January 2010.

His disappearance remains a mystery.

On the 29th of April 2005, journalist Dharmeratnam Sivaram was kidnapped and murdered.

On the 6th of January 2009, the Sirasa TV station in Depanama was attacked.

On the 22nd of March 2010, the head office of the Sirasa TV media network was attacked, putting the lives of hundreds of reporters, engineers, and technicians at risk.

On the 25th of March 2009, the Udayan newspaper in Jaffna was attacked by a hand grenade.

The office of the newspaper was attacked again in 2013.

What has happened to the investigations on the attack on Siyatha TV on the 30th of July 2010?

These attacks are not attacks against journalists. Or Media Institutions. But against the People.

It is the Journalist who stands by the peoples right to know.

And when journalism is silenced, by bombs, bullets or Fear it is the Truth, that is the casualty.

Today, on the International Day to End Impunity for Crimes against Journalists, we remember the lives that were lost and the blood that was shed in the name of the TRUTH.

But it is also a day to remember this: There is no escape from the Light of the Truth.