COLOMBO (News 1st); Elevating the prevailing bonds of military cooperation to new heights and ushering in a new rays of hope for improvement in the mechanical and technical spectrum of interests, both the visiting Chief of Defence and Commander of the Army, General Shavendra Silva and his Russian counterpart, Commander-in-Chief of the Russian Land Forces, General of the Army, Oleg Salyukov ensued a comprehensive exchange of views on wide-ranging matters of mutual interests minutes after dignified and glamourous military honours saluted the Sri Lankan Army Chief. 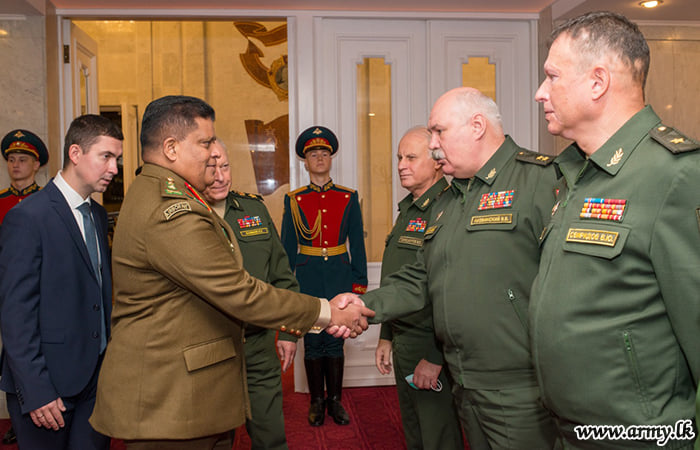 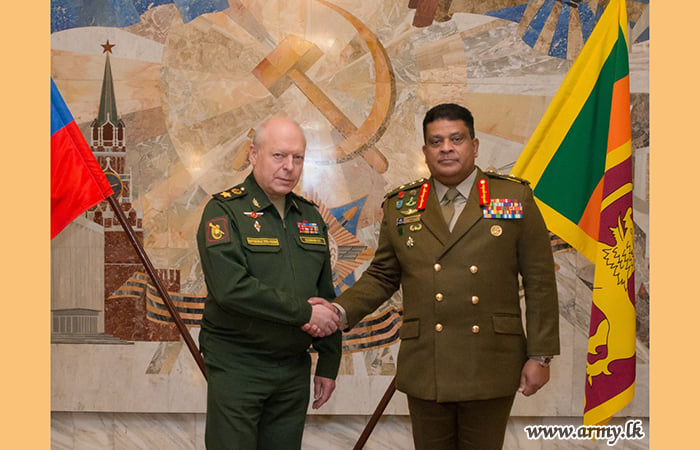 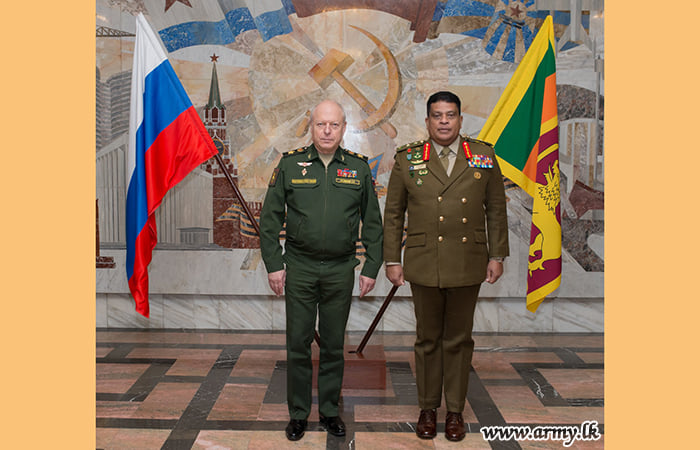 After a cordial welcome to the Land Force Commander’s office, the visiting Sri Lankan Army Chief gratefully acknowledged the Russian government’s generous and timely technical and mechanical support, lent to Sri Lanka when the country was faced with threats of division before May 2009.

The Commander-in-Chief of the Russian Land Forces appreciated the Sri Lankan Army Chief’s acceptance of his invitation to arrive in the Russian Federation and expressed his pleasure for being able to host him to high military honours in the historic garden of Moscow Kremlin in the midst of the pandemic.

Towards the end of the nearly one-hour-long discussions, held in an environment of friendship, mutual understanding, and amiability, the Russian Land Force Commander-in-Chief awarded a special memento to his visiting counterpart. General Shavendra Silva in turn reciprocated the gesture and presented a symbolic souvenir to his host as a token of goodwill and existing cooperation. Few Senior Russian military Officers were also associated with the meeting at the Russian Commander-in-Chief’s office.

During General Shavendra Silva’s stay in the Russian Federation, he is scheduled to visit the Moscow Higher Combined Arms Command School and meet with its Commandant, Major General Roman Binyukov, Division Commander of the 4th Guards Tank Division in Naro-Fominsk and the Commandant at Mikhailovskaya Military Artillery Academy before he visits the Military Medical Academy and several other places of military and tourist importance.

In February 2020, during a formal visit to Sri Lanka, General of the Army, Oleg Salyukov extended an open invitation for this visit. However, the visit had to be indefinitely postponed due to the outbreak of COVID-19 pandemic and General Shavendra Silva’s commitment to its control as Head of the National Operation Centre for Prevention of COVID-19 Outbreak in Sri Lanka.