Considered to be one of the highest honours, presented in recent times, the formal and elegant Guard of Honour parade with four squads of the Russian Land Forces, together with a Russian Army band distinctively featured the significance and the recognition the Russian Land Forces attach to the visiting military dignitary from Sri Lanka. 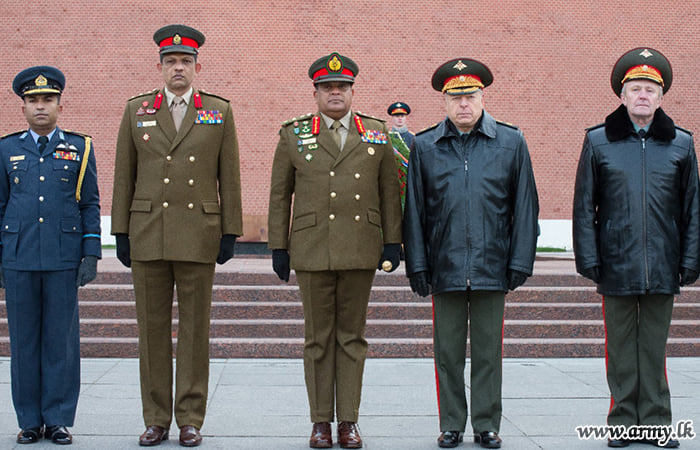 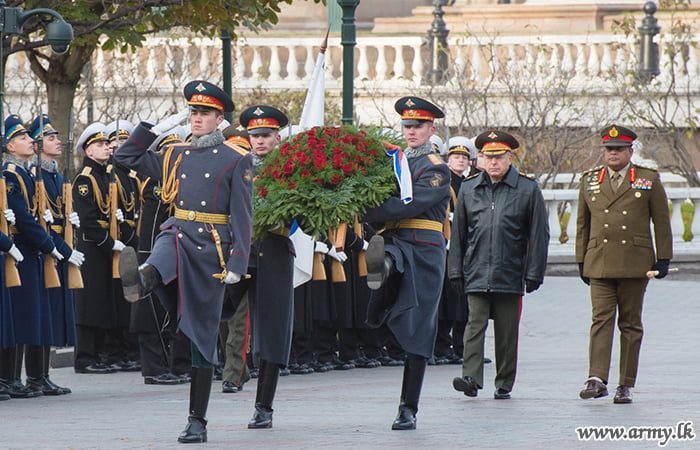 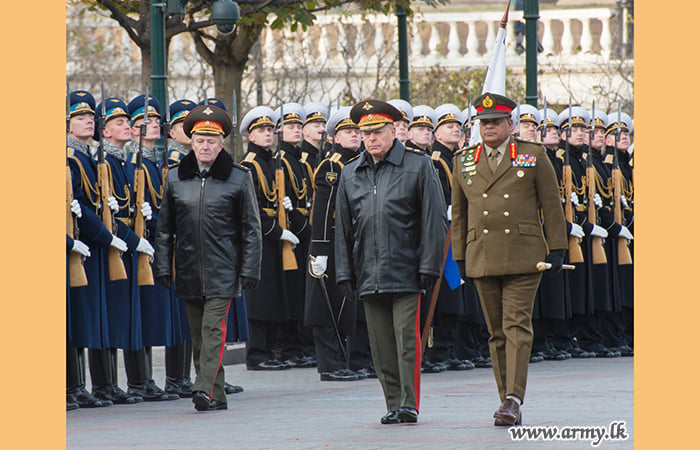 Just after melodies of Sri Lankan and Russian National Anthems echoed through the reputed parade ground, and the parade commander reported, the day’s Chief Guest, General Shavendra Silva, together with his host, the Commander-in-Chief of the Russian Land Forces, General of the Army, Oleg Salyukov reviewed the glamorously-dressed troops in the Guard of Honour and took the salute, presented in his honour.

Sri Lanka’s Army Chief, General Shavendra Silva after formal honours were ushered to pay floral tribute to the widely-reputed monument at Alexandrovsky Garden of Moscow Kremlin where the much-respected ‘Tomb of the Unknown Soldier’ stands. 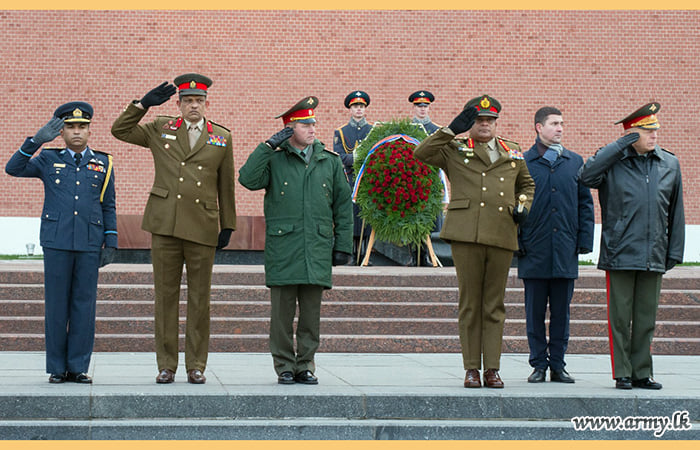 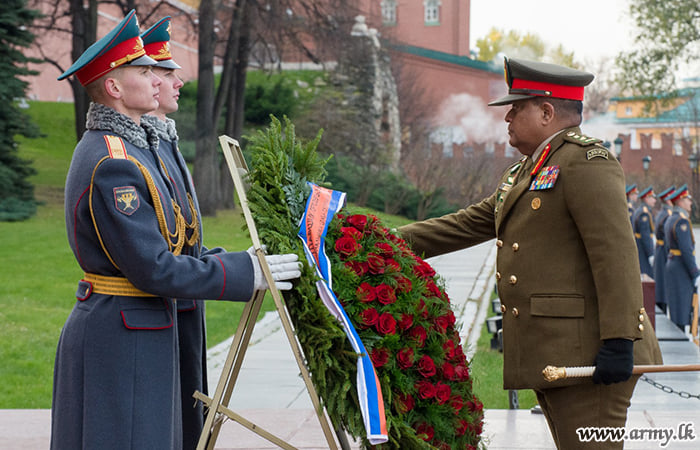 After laying a floral wreath, the Sri Lankan Army Chief in a solemn moment of remembrance saluted the memory of fallen Russian War Heroes before the visiting Army Chief was invited to the nearby Armoury Museum of the Moscow Kremlin which is regarded as a place of elegant calm in the often hectic city of Moscow.

Minutes after formal ceremonials, General Shavendra Silva was invited to the office of his host at the Ministry of Defence where the Commander-in-Chief of the Russian Land Forces, General of the Army, Oleg Salyukov was awaiting the former’s arrival for interactive negotiations. 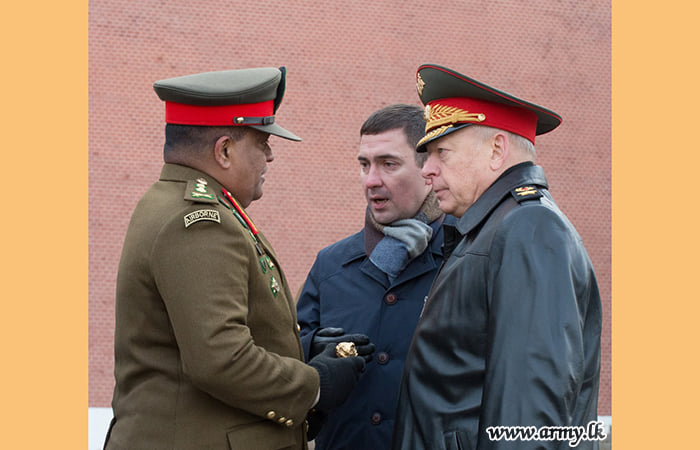 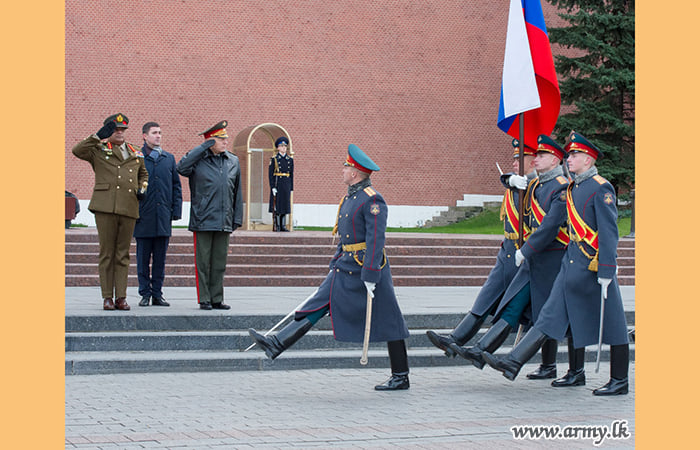 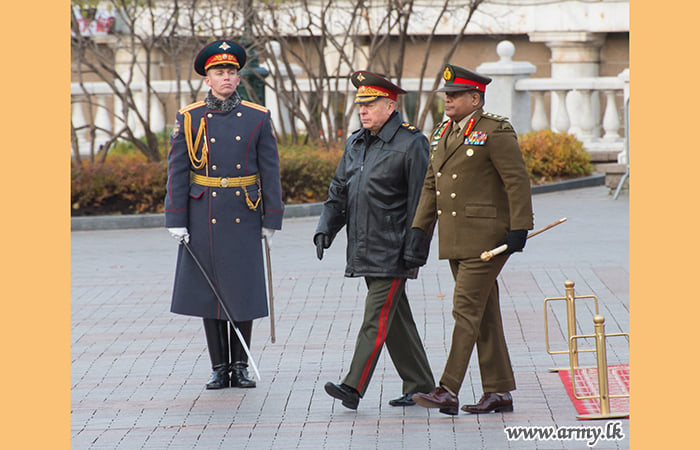 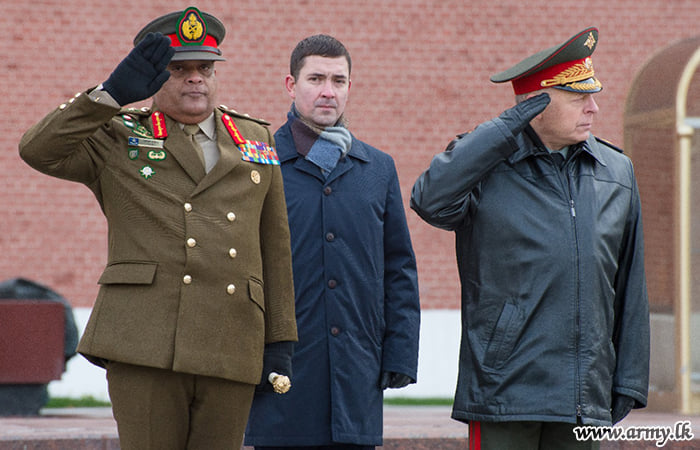 During General Shavendra Silva’s stay in the Russian Federation, he is scheduled to visit the Moscow Higher Combined Arms Command School and meet with its Commandant, Major General Roman Binyukov, Division Commander of the 4th Guards Tank Division in Naro-Fominsk, and the Commandant at Mikhailovskaya before he visits the Military Artillery Academy, Military Medical Academy and several other places of military and tourist importance.

In February 2020, during a formal visit to Sri Lanka, General of the Army, Oleg Salyukov extended an open invitation for this visit.

However, the visit had to be indefinitely postponed due to the outbreak of the COVID-19 pandemic and General Shavendra Silva’s commitment to its control as Head of the National Operation Centre for Prevention of COVID-19 Outbreak in Sri Lanka. 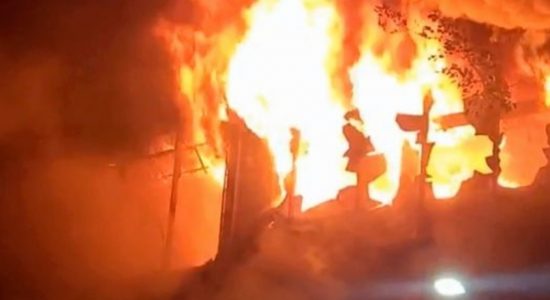