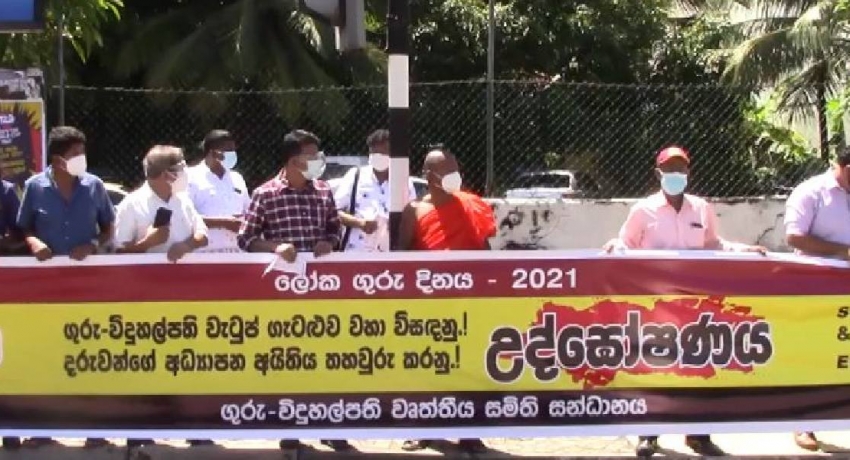 COLOMBO (News 1st); The Secretary-General of the Ceylon Teacher’s Union, Joseph Starlin says that politicians are attempting to takeover the school keys from the hands of principals.

Recalling that there were several incidents of politicians calling principals of schools with less than 200 pupils, Starlin said that the politicians have threatened these principals, asking whether they are going to resume academic activities on 21 October or not.

Meanwhile, SLPP MP Dilan Perera speaking to media said that the teachers unions are attempting to launch a mud slingling campaign on the Government through their protests.

The State Minister of Transportation Dilum Amunugama emphasized that the Government has already accepted that the teachers have an issue and have promised to solve this issue by next year. He also requested the unions to not to think as teachers, but as public servants.

” When public servants have been called for work, and they do not comply then there is a big issue,” he said.

Amunugama further stated that if any of the teachers who will be engaging in academic activities after 21 October are threatened, action will be taken against them.

State Minister Dayasiri Jayasekara said that those who are threatening teachers and are issuing warnings against them are people who have never stepped inside a classroom.

Speaking to media today (16), Jayasekara said that while understanding that teachers should be respected, the unions should also consider the Government’s proposal to put an end to the protest by granting their demands in two stages.