COLOMBO (News 1st); People in Polonnaruwa protested on Sunday (26) against the decision to develop a jogging track on the breakwater of the historic Parakrama Samudra.

The protesters led by the farming community allege the removal of an electric fence for the jogging track had given way for wild elephant to encroach on their villages, threatening property and life. 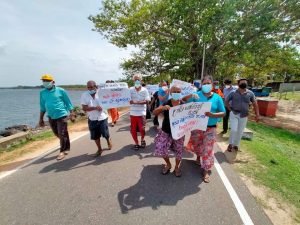 They demanded the government take immediate measures to reconstruct the electric fence that was removed.

These locals said a jogging track is not the requirement of the area.

The Maha Sangha visited several villages that have already been affected by encroaching wild elephants.

Venerable Pahiyangala Ananda Sagara Thero, the Chair of the Surakimu Sri Lanka Movement alleged that due to the conduct of the government around 5,000 wild elephants will be lost in the next few years.

“The future generations will only know of the Sri Lankan wild elephant, through artwork,” the Venerable Thero said.

State Minister Anuradha Jayaratne said the decision on constructing a jogging track must be decided by the experts and no one has the right to change that decision.

On the 26th of August 2021, News 1st for the very first time exposed how the breakwater of the ancient Parakrama Samudraya is being bulldozed for the construction of a walking path.

Local authorities on the 27th of August temporarily suspended the project to construct a jogging track on the breakwater of the ancient Parakrama Samudra following strong opposition from the Maha Sangha.