COLOMBO (News 1st); The block of the ocean within the Sea of Sri Lanka, along Sri Lanka’s North-Western Coast may turn out to be one of the most hotly contested geopolitical hotspots in the region.

As Sri Lanka plans to adopt a Petroleum Development Authority Act (PDA) that contains legal provisions regarding petroleum and natural gas exploration, several islands promised to China for Power Projects may lead to an escalation of posturing between India and China, and the West. 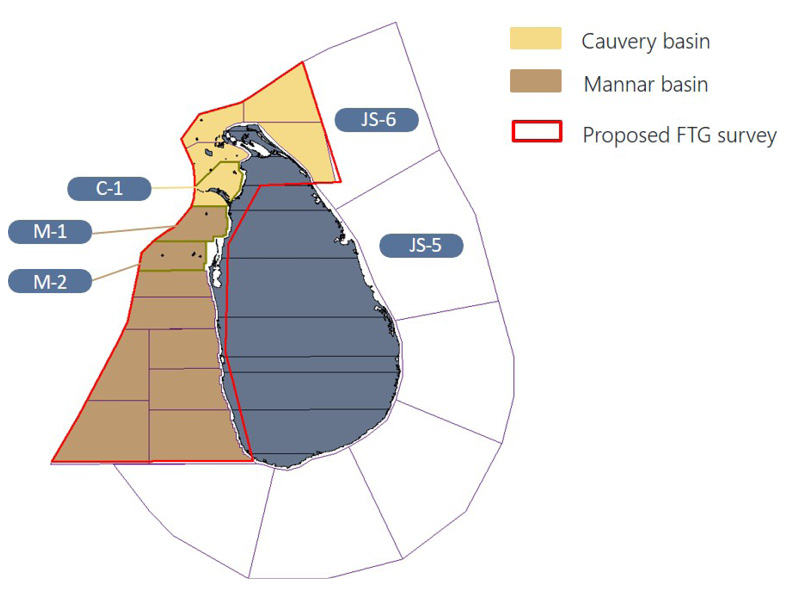 The announcement comes as Sri Lanka carried out its first-ever Airborne oil exploration survey or Full Tensor Gradiometry (FTG), Gravity and Magnetics survey, targeting petroleum resources off shallow water areas in the Mannar and Cauvery basins off the West Coast of the island. 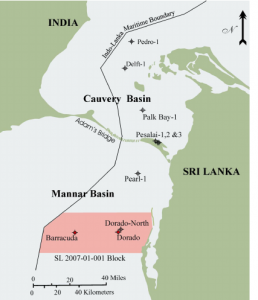 Sri Lanka already has a plethora of data from earlier surveys, as this block has been of interest for Oil and Gas exploration for decades, including by Cairn Energy PLC in 2009, and the Indian Oil Exploration company.

The latest survey is conducted by the UK-based Bell Geospace, a world-renowned geophysical survey company that was chosen following an international competitive tender process, according to the Government.

Minister of Energy, Udaya Gammanpila said that the $ 267 billion worth of oil and gas resources hidden in the Mannar Basin could generate three times the total debt of the country.

These developments come at a time when there is growing interest on three Northern islands namely Nainativu, Delft or Neduntheevu, and Analaitivu, located in the Palk Bay.

On January 18th 2021, the Cabinet approved a proposal to involve Sinosoar-Etechwin Joint Venture in China to install ‘hybrid renewable energy systems’. The energy project’s local partner, the Ceylon Electricity Board, had entered into a joint venture with MS/Sinosar-Etechwin of China and the lands were also identified for this project.

The project has reportedly come to a standstill due to COVID-19 as visitors are not allowed to enter the islands, unless with approval from the relevant authorities. India has expressed its “strong” concern about the location of three Chinese renewal energy projects in Sri Lanka’s Northern Province barely 48 km from Rameswaram in Tamil Nadu.

This comes in the wake of the US, UK and Australia signing a trilateral security alliance for the Indo-Pacific in an attempt to counter China’s growing assertiveness in the region. The pact, termed AUKUS (Australia, UK and US), is expected to help Australia acquire nuclear-powered submarines in a bid to counter China’s growing power in the strategically vital region.

China initially opposed the formation of the Quad and in the 13 years since, Beijing’s position has not changed.

Each of the Quad members are threatened by China’s actions in the South China Sea and its attempts to extend its sphere of influence through initiatives such as the One Belt One Road Project. There is growing concern as to whether Sri Lanka will be caught in the middle of an intensifying cold war between China and the West.

Sri Lanka’s close affiliation to China has raised red flags with the West, with the latest example being the UN Human Rights Sessions Councils 48th Session, in which Sri Lanka and China backed each other on Human Rights issues. Despite this being the diplomatic position, Sri Lanka’s export-driven economy is mainly dependent on exports to the Western Block (EU and US) and not China.

Authors Note: The Sea of Sri Lanka is an area of Ocean some 500,000 Sq. k.m’s in area, surrounding Sri Lanka comprising of the island-nations Exclusive Economic Zone.