COLOMBO (News 1st); The 1996 World Cup-winning Sri Lankan Captain Arjuna Ranatunga paid tribute to late R. Rajamahendran, Chairman of Capital Maharaja group, a statement noting that the passing of such a leader is the country’s misfortune.

The statement from Arjuna Ranatunga is as follows :

To Sir, With Love

Mr. Rajamahendran, known to some as ‘Kili’ or ‘RR’, but will forever be ‘Sir’ to me, has made contributions to our country and society that are too great to ever be overcome.

He pioneered a new age media, saw the potential in small businesses and expanded them into conglomerates, and shaped and molded sports by helping in the development of cricket, cricketers, and other sports from the shadows.

Over the last few hours, we’ve seen people from all corners of the world paying tribute and accolades to this great gentleman by acknowledging his achievements.

However, for me, Mr. Rajamahendran was a father, and as such, it has taken me some time to come to terms with his passing.

Nevertheless, I would like to take a moment to reflect on what Sir meant to me. I was an eighteen-year-old teenager when I first got to know Mr. Rajamahendran, and over the past forty years, he was a guiding light, a pillar of strength, and a voice inside my head, pushing me to greater heights, guiding me towards the right path, and encouraging me to fulfill my potential.

In those forty years, his doors have always been open to me, whether it was for sports, politics, or for personal matters. The shadow of Mr. Rajamahendran will be cast over every nook and corner of Sri Lanka for a very long time.

The passing of such a leader is our country’s misfortune, especially at this crucial juncture.

In the last thirty years, I had made a habit of visiting Sir at his office. During these visits, our conversations ranged from discussions about serious matters such as politics and sports to talking absolute nonsense and hilarious things that cannot be made public.

He was a father, but he was also my friend and my mentor. Whenever I would visit him at his office, like a father, he would without fail, walk me down to my car, open the car door for me, make sure I was buckled in safely, bid me farewell, and stayed till I went through those gates.

If I’d known that when I visited you two days prior to my departure to USA was the last time you’d bid me farewell, I would’ve stayed a little while longer, had another cup of coffee with that special cucumber sandwich, and hugged
you a little longer.

You were a great gentleman and a special kind of human being. You taught me to be stronger, be smarter, and be humane. I will forever be grateful for all the support you’ve given me over the last forty years. You have played an immense role in molding me into the sportsman I am, the politician I try to be, and the human being I aspire to be.

Thank you, dear Sir. I will miss you dearly. 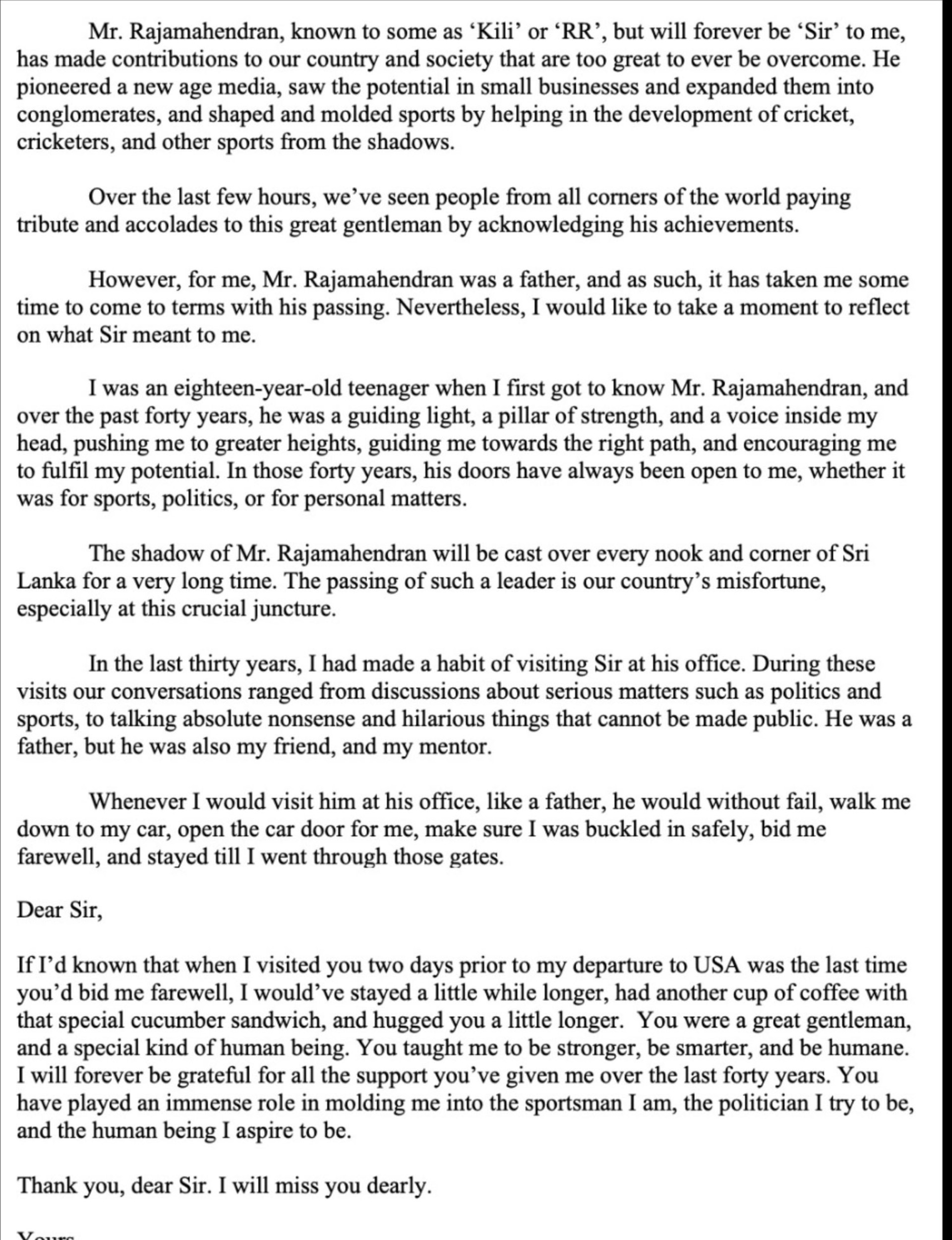