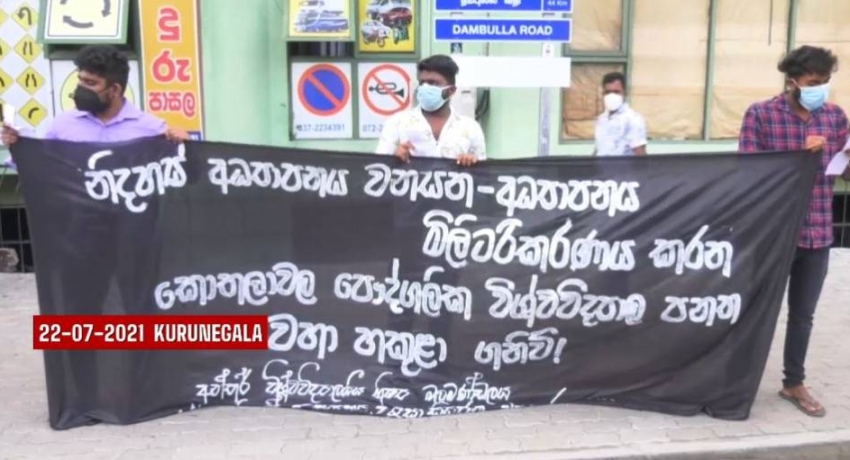 COLOMBO (News1st): Student unions have launched protests against the Sir John Kotelawala Defence University Bill. The bill is to be taken up for a debate again on the 6th of August.

However, it will be taken into consideration by a consultation committee appointed by the defence ministry, before the debate. This is a comprehensive look at the ongoing discourse concerning the Sir John Kotelawala Defence University Bill.

“People need to know whether the Kotalawala Defence University will continue to function as a military university or as a civil university,” Dr. Nalinda Jayatissa, a former JVP parliamentarian said.

But Most Ven. Niyangoda Vijithasiri Thero, the Chief Incumbent of the Malwathu Chapter of the Siam Sect, said it is wrong to call this militarization.

“I would like to kindly state that it is a matter of national importance to pass these rules and regulations for the future betterment of this University,” he said.

“Parents can enrol their stubborn children at this university. They will assure you that your child will never join any protest or satyagraha,” defence secretary Rtd. General Kamal Gunaratne said.

He added that the university produces citizens who can contribute to the development of this motherland.

A protest was staged by the Inter-University Students Federation in the Kurunegala town, demanding the withdrawal of the Kotalawala Defence University bill.

“In 2018, a bill was drafted to privatize the education of the country,” Udara Sandaruwan, a member of the Inter-University Students Federation said.

“Back then, Gotabaya Rajapaksa and Mahinda Rajapaksa said that we should defeat this bill. But today, they have brought it again to deprive the education of the innocent citizens of this country”.

Another protest was staged by the Inter-University Student Federation and the Student Movement for Free Education in the Kandurawela town in Polonnaruwa.