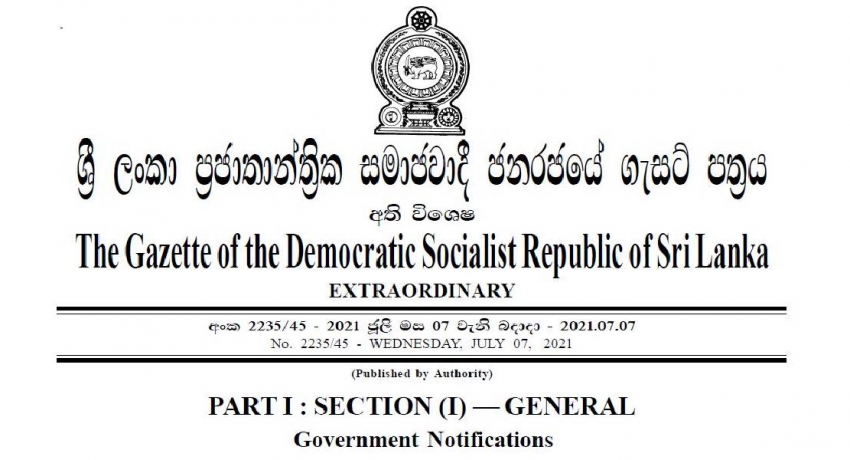 According to the extraordinary gazette issued on Wednesday (Jul. 07), the Ministry of Finance, which came under the purview of Prime Minister Mahinda Rajapaksa jointly with Minister of Buddhasasana, Religious & Cultural Affairs and Minister of Urban Development & Housing will now function as a separate Ministry.

A new ministerial portfolio titled, “Minister of Economic Policies and Plan Implementation”, has been established through the extraordinary gazette.

10 institutions including the Public Utilities Commission of Sri Lanka (PUCSL), the Department of Census and Statistics, and the National Planning Department will now come under the purview of the new Ministry.

Meanwhile, as per the extra-gazette, the newly established Selendiva Investments Limited will come under the State Minister of Urban Development, Waste Disposal, and Community Cleanliness.

Furthermore, another new ministry titled “State Minister of Coast Conservation & Low-Lying Lands Development” has been established through the gazette.

According to the extraordinary gazette, a new “State Ministry of Promoting the Production & Regulating the Supply of Organic Fertilizer, and Paddy & Grains, Organic Foods, Vegetables, Fruits, Chillies, Onion and Potato Cultivation Promoting, Seed Production and Advanced Technology Agriculture” will also be established.

Seven institutions including the National Fertilizer Secretariat and Ceylon Fertilizer Company Ltd. will come under the purview new State Ministry.