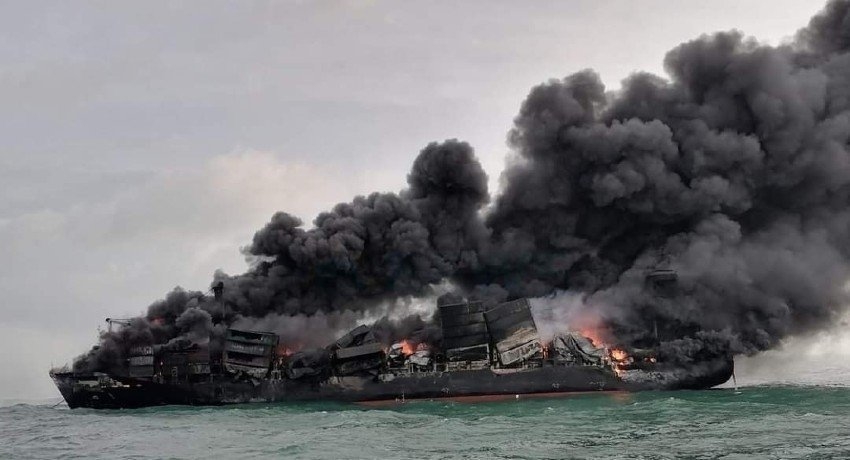 COLOMBO (News 1st); The MV X-PRESS PEARL container ship had not informed Sri Lankan authorities of an acid leak on board, before entering Sri Lankan waters.

The vessel reached the Colombo Harbour at around midnight on the 19th of June, said State Minister Dr. Nalaka Godahewa adding it was 10 hours later that the Sri Lanka Ports Authority was informed of the need to offload a container.

“This was communicated via email to SLPA,” he said adding the vessel had requested to make a change to a container when it is allowed to enter the CICT terminal at midnight on the 20th of June.

Sri Lanka was not informed of any emergency situation on board, he noted while stating that the vessel informed SLPA of smoke on board around 12 hours after it anchored at the Colombo Harbour.

It was two hours later that the vessel had requested immediate assistance from Sri Lanka to contain the fire from the Sri Lanka Ports Authority, said the State Minister.

Earlier on Friday (28), X-PRESS FEEDERS the owners of the X-PRESS PEARL released an incident overview statement.

Incident Overview Released by X-PRESS FEEDERS is as follows:

On May 20, 2021, the Singapore-flagged Containership, ‘X-Press Pearl’ reported smoke from the cargo hold while at Colombo anchorage, Sri Lanka.

Emergency procedures were initiated, and CO2 released in the cargo hold. Port control and the local authority were informed, and Sri Lankan navy assets along with firefighting teams were placed on standby.

The Harbour Master and Sri Lankan Navy were on standby to assist in case of evacuation.

Fire and chemical experts were contacted by the vessel operators, and Smit Salvage was appointed as Salvors.

The crew and firefighting team were transferred to a quarantine facility ashore. Unfortunately, two crew members suffered leg injuries during evacuation and were taken to the hospital for attention. All were reported to be in stable condition.

On May 27, efforts to extinguish the fire on board were ongoing with firefighting tugs, the Sri Lankan Navy, and an Indian coastguard remaining on scene.