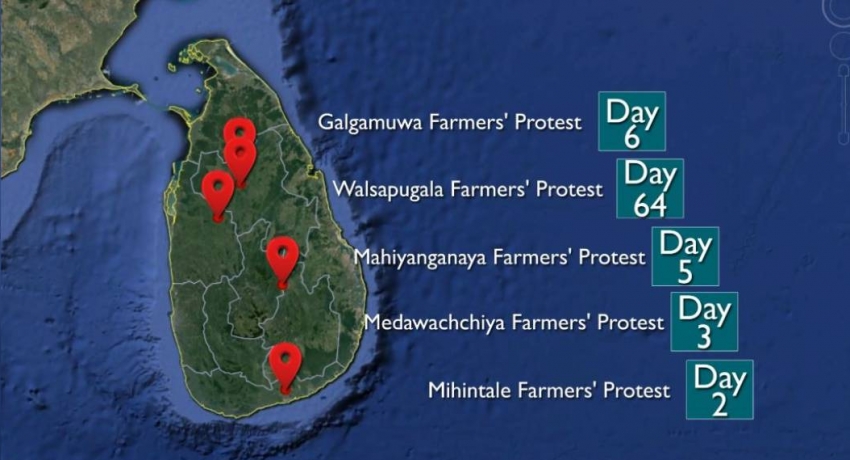 COLOMBO (News1st): Protests continued to take place in Sri Lanka to protect forests and the wildlife, as the world celebrated the International Day of Forests on Sunday.

The human-elephant conflict has posed major problems to the people amidst the declining forest cover of the country.

Against this backdrop, farmers of Galgamuwa are staging a protest today demanding a scientific solution to this problem.

The Satyagraha has drawn the support of several organizations since its inception.

The Satyagraha launched by farmers of Walsapugala at the Mahiyangana town entered its 5th day today.

The Satyagraha is taking place with the involvement of 37 farmers groups.

The only plea of these farmers is to resolve the worsening human-elephant conflict, including Mahiyangana.

The wife and children of the victim of a wild elephant attack joined the Satyagraha today.

“I hope that no other family will ever have to feel the pain and sorrow that I and my children are experiencing right now,” the wife of the deceased father of two said.

“These children have no father for the rest of their lives and I don’t have a husband,” she lamented.

The Satyagraha launched in Medawachchiya, demanding a scientific solution to the human-elephant entered its third day today.

The demonstration is taking place with the involvement of the All Ceylon Farmers Federation.

a group of residents from Palugaswewa staged a Satyagraha today opposing moves undertaken by the government to acquire a private plot of land.

The protestors pointed out that a land area spanning three acres in their possession for 35 years, is being transferred to another entity due to political interference.

Upon inquiries made by News1st, the Mihintale Divisional Secretary said that the land belongs to the government.