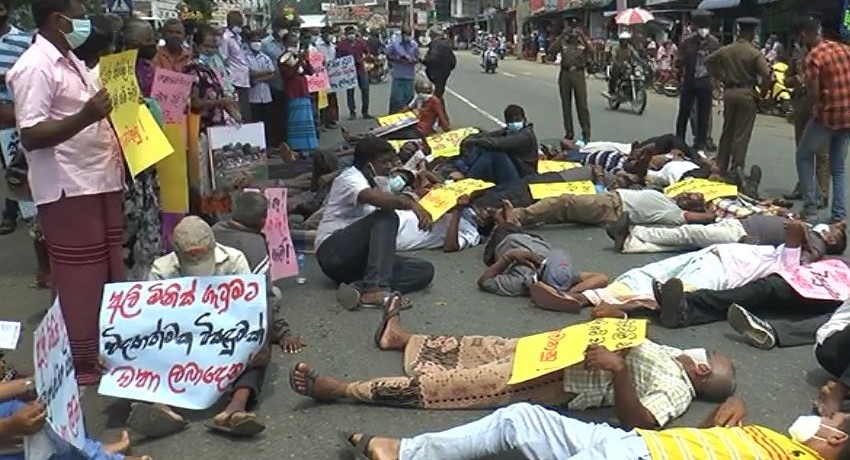 Colombo (News 1st); Another group of farmers, this time from Uhana in the Eastern Province took to the streets on Thursday (18) demanding a solution for the human-elephant conflict experienced daily.

These farmers decided to obstruct the Ampara – Uhana Road from the Uhana Town forcing traffic to come to a complete standstill for over an hour.

Multiple agrarian unions joined hands with these farmers in their call for a solution to the growing human-elephant conflict in the east.

“My brother was mauled to death by a wild elephant a month ago and one elephant walked across my garden last night,” said one farmer highlighting the fear among many farmers living in Uhana.

Several other farmers also voiced their issues adding it is now impossible to even visit a neighbor for assistance due to the threat of wild elephants.

Wasantha Piyatissa, a leader of an agrarian movement said according to wildlife officers, the entire Ampara District has only 07 vehicles, while one minister enjoys a fleet of almost 10 vehicles.

At the same time, farmers in Mahiyanganaya are engaged in a satyagraha campaign for the second consecutive day demanding a solution for the human-elephant conflict.

For the 61st consecutive day, farmers in Walsapugala are engaged in a Satyagraha campaign demanding the Proposed Wild Elephant Management Reserve in Hambantota be included in the government gazette.