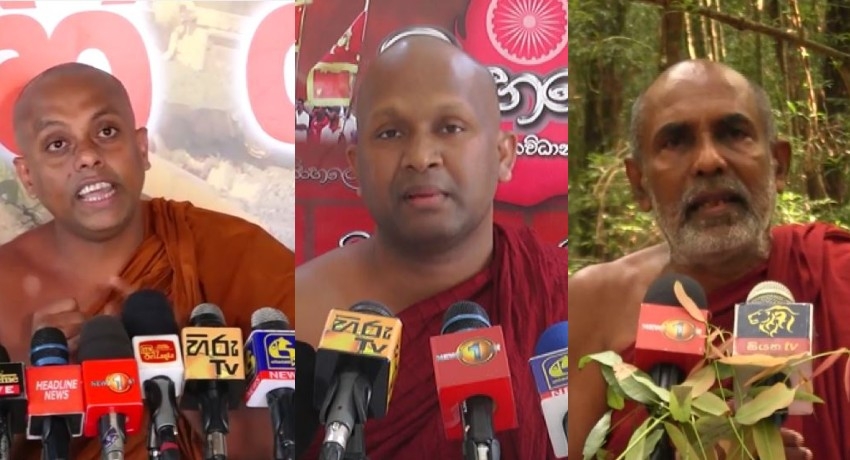 Colombo (News 1st); Members of the clergy and the other movements have come forward to defend Bhagya Abeyratne, who voiced her comments against the deforestation taking place in Sinharaja and surrounding areas.

Venerable Medille Pannaloka Thero from the Sinhale organization raised concerns as to why the government is going after Bhagya Abeyratne at a time when she did not mention any names in her comments.

“The documents clearly state the land in questioned is owned by the famous businessman who owns Guruge Gems,” said the Venerable Thero adding that it is possible the money from the gem merchant is being used to silence those who stand up against environmental destruction.

The Chairperson of the Surakimu Sri Lanka Movement, Venerable Pahiyangala Anandasagara Thero warned the government officials to end the harassment on Bhagya Abeyratne adding President Gotabaya Rajapaksa is mum over these events.

He called on the President to suspend his ‘Discussion with the Village’ program and visit Sinharaja to witness the destruction for himself.

“What needs to be done is not to question the young girl over her comments, but to remove the minister (Minister of Wildlife and Forest Conservation) from his post,” stressed the Venerable Thero.

Nirosha Athukorala, the convenor for Women’s Organization for Justice also slammed authorities for failing to question the landowners, while they only question Bhagya Abeyratne over her comments.

Former JVP Politician Samantha Vidyaratne said Saubhagya (Prosperity) is coming after Bhagya rather than cracking down on the destruction caused to the environment.

He was referring to the government policy statement on prosperity.

“The youth in the country along with the clergy are rising against these acts and the government is showing its failure through attempts to silence dissent,” he added.