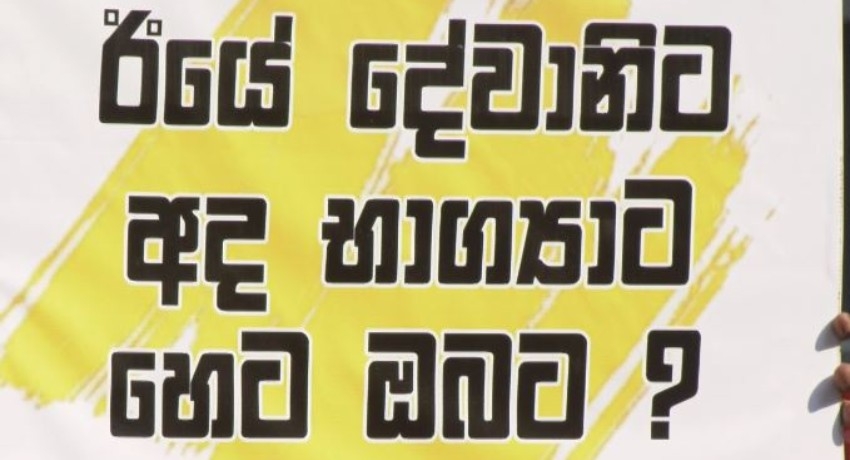 Colombo (News 1st); Multiple groups have started to rally around Bhagya Abeyratne, who spoke out against the destruction taking place to the Sinharaja Forest Reserve, which is a UNESCO World Heritage Centre.

Activists have condemned the harassment of Abeyratne who has become the center of an investigation by the authorities, and claim the authorities are more focused on her comments rather than taking action against environmental destruction and deforestation.

On Wednesday (17) the Socialist Youth Union staged a silent protest in Colombo opposite the Human Rights Commission demanding an investigation for violating the rights of Bhagya Abeyratne.

“We will not remain silent if anyone attempts to lay a hand on those who stand up against environmental destruction,” said Anjana Sampath Amarasinghe from the Socialist Youth Union (SYU) adding the government has no right to take away the people’s right to breathe fresh air.

“We are ready to bring the people together against deforestation and send this government packing,” he added.

The Lak Vanitha movement of the United National Party started a program to collect public signatures for a petition against the harassment on Bhagya Abeyratne.

“Women from all districts will rally to protect her,” said Shanthini Kongahage, the Chairperson of the movement.

The Wildlife Conservation Department has decided to acquire privately-owned lands with forest cover, surrounding the Sinharaja Forest Reserve to the government.

The spokesperson for the Department of Wildlife Conservation, Nishantha Edirisinghe said based on estimations conducted so far, there are around 400 hectares of such privately owned lands with forest cover, around the Sinharaja Forest Reserve.

According to Edirisinghe, despite the forest cover in these lands, the Wildlife Conservation Department has NO provisions to prevent deforestation under the Forest Conservation Ordinance, given the lands are privately owned property.

He said a large expanse of close to 35,000 hectares of forest cover in state-owned surrounding the Sinharaja Forest Reserve was gazetted as part of the reserve, last year.

Speaking to News 1st, Nishantha Edirisinghe said by acquiring these privately owned lands with forest cover surrounding the Sinharaja Forest Reserve, its safety will be further ensured as a World Heritage site.