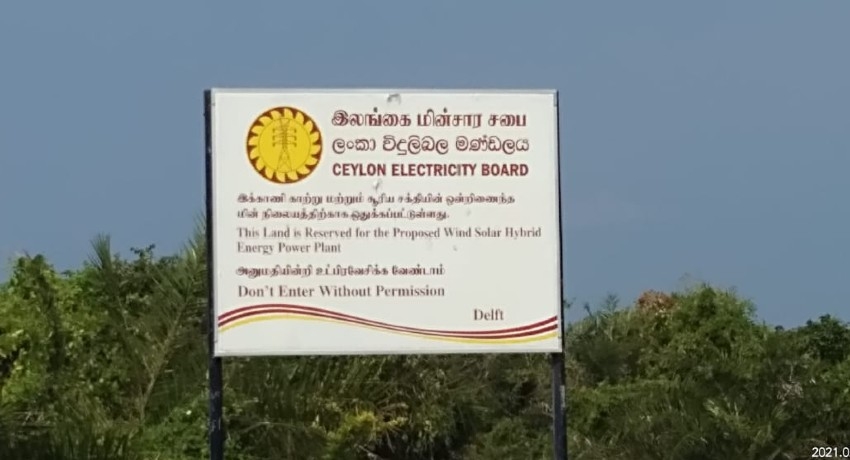 Colombo (News 1st); 03 islands in the north of Sri Lanka, were selected for the ‘Supporting Electricity Supply Reliability Improvement Project’ by the Asian Development Bank in order to provide renewable energy to the islanders.

The Ceylon Electricity Board (CEB) decided to implement hybrid power plants initially in three selected islands off the Jaffna Peninsula, namely Analaitivu, Delft, and Nainativu, and the lands allocated for this purpose have already been marked.

The energy sources to be tapped for this purpose are wind and solar resources, according to the Asian Development Bank and the Sri Lankan cabinet decided in mid-January 2021 to offer a Chinese company to develop power projects in three islands in the North with USD 12 million facility from Asian Development Bank.

The energy project’s local partner, the Ceylon Electricity Board, had entered into a joint venture with MS/Sinosar-Etechwin of China.

The award to the Chinese company was recommended by the Cabinet-Appointed Standing Committee on Procurement.

However, a recent visit by News 1st to these three islands revealed, the islanders were not even aware of such projects which to commence in their own backyard.

The Island of Delft

Delft is the second largest island in Sri Lanka, located 10 km off the mainland of the Jaffna Peninsula. The island is approximately 8 km long and 6 km wide with an approximate land area of 47 km2.

Tourism in the island is growing due to different attractions such as Dutch & Portuguese history, its temples, and wild horses.

The main livelihood of the people is fisheries, while people also engage in agriculture and livestock.

Nainativu is one of the islands in the Velanai Divisional Secretariat with a total population of 2,861 from 874 families.

Nainativu is located about 2 km off the mainland (Kurikattuwan) of Jaffna Peninsula and the total land area of the island is 5.6 km2.

The main livelihood of the people in Nainativu is fishery and the present employment level is around 42%.

Analaitivu is a small island located about 5 km off the mainland of the Jaffna Peninsula.

The main livelihoods of the people in the island are fishery and agriculture.

On the 16th of February 2021, in order to clearly understand the situation in Delft, News 1st visited the island and uncovered that a 12-acre plot of land has been allocated for the project.

Residents of the Thirulingampuram village located close to the proposed site for the proposed project said that they are unaware of this project.

However, many of the residents there are of the view that conducting this project with a Chinese company would cause many adverse effects on their livelihood.

People living in Nagadeepa and Annalaithivu also shared the same sentiments about the proposed projects on the islands.

The islanders claim the arrival of Chinese Companies to their backyard could bring multiple issues including to their livelihoods.

Some locals who spoke to News 1st on the condition of anonymity said they would prefer a project that would not pose any threat to their lives and farms, adding the proposed projects could also pose a threat to the rich culture and heritage on the islands.

The Indian envoy in Colombo has raised his government’s concerns and offered to develop the project with a similar grant from India.

India’s protest against awarding the projects to China was on the grounds that such a move would raise security concerns for it, it was widely reported.

It was also reported that Sri Lanka asked India to submit competitive proposals and added that its companies could bid for other projects in the Northern Province.

But India’s concern was strategic and its security against Chinese snooping.

Sri Lankan authorities however say that India should not cite “security” as a reason for blocking Sri Lanka’s projects beyond reasonable limits as doing so infringes Sri Lanka’s sovereignty.

Islands will not be given to foreign nations – Minister

Islands in the north of the country will not be released to any country, affirmed Minister of Power Dullas Alahapperuma on Monday (22).

He said several islands in the north, including Annalaithivu and Nagadeepa are provided with electricity using generators for a limited period during the day.

Therefore, it was decided to provide electricity using Solar and Wind Energy for the islanders by calling for international tenders for the project, he said.

The project is to cost 12 Million US Dollars given by the Asian Development Bank as a loan, and following the tender process, the Indian High Commissioner to Sri Lanka approached the government with a similar proposal.

The Government is yet to decide on the matter, he said adding the decision will be made for the benefit of the people.