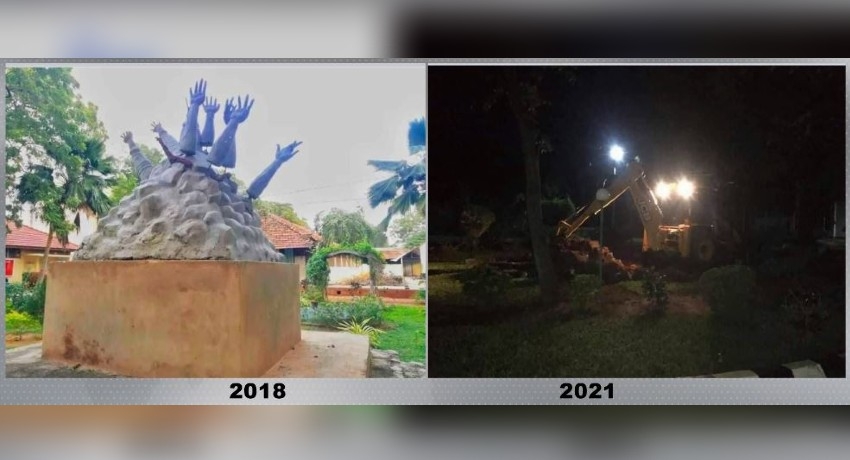 COLOMBO (News 1st): A memorial that is being built at the Jaffna University was demolished last evening.

The construction of the Mullivaikkal Memorial was launched by the students union of the Jaffna University at the premises of the institution in 2018.

The memorial was being built in remembrance of the people and students who had died in the Mullivaikkal area.

Students protested against steps that were taken to demolish the memorial last evening.

University alumni, the general public, and political activists attempted to enter the premises of the university seeking a meeting with the Vice-Chancellor.

Police and the Special Task Force personnel were deployed for security in the area.

The group that gathered outside the university yesterday remained until this morning before being notified by the police that they would be subjected to PCR tests if the gathering continues.

Some university students began a fast while many individuals dispersed following the announcement given by the police.

The Vice-Chancellor added that the memorial was being constructed without approval and that such structures cannot be built at universities.

“We need to ensure that the children are not divided. To ensure that our past experiences do not occur again, we must maintain unity and peace among students,” Chairman of the University Grants Commission Prof. Sampath Amaratunge said.

Responding to journalists in Polonnaruwa today, Minister of Youth Affairs and Sports Namal Rajapaksa said that a report must be sought on the incident.

“We have a good cabinet minister. He will inquire into the matter and do the needful. We will not allow racism to emerge in this country,” the Minister added.