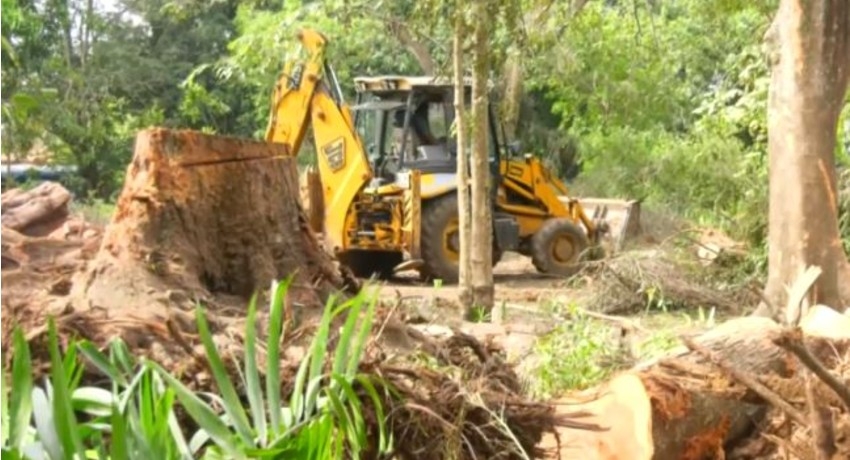 Colombo (News 1st);  The Rajapihilla Park in the heart of Kurunegala has fallen prey to another so-called development drive.

It is no secret, the Rajapihilla Park is a place used by thousands of visitors daily to take a break from their daily routine.

“Thirty-two trees have been cut down in total,” Ranuka Sananjaya, a member of the Janatha Vimukthi Peramuna in the Kurunegala Municipal Council said.

Although 28 trees had been earmarked to be cut-off as part of the development plan, News1st learns that 32 trees have already been chopped off.

An ancient structure of archaeological value has also been demolished at the park.

Local residents say that development activities have damaged the natural landscape of the centuries-old park.

The chief priest of a temple in the area pointed out that action has not been taken against the demolition of archaeological sites including an ancient King’s Court in the area recently.

“Incidents of this magnitude could have been avoided if proper action was taken when we raised concerns on the demolition of the archaeological structure,” Ven. Tissava Sumananda Thero said.

Opposition lawmaker Nalin Bandara has raised concerns on the development of the Rajapihilla park in Kurunegala at the cost of cutting down trees.

“In which country do they develop parks by cutting off trees?” the Samagi Jana Balawegaya parliamentarian who visited the area on Sunday questioned.

An officer at the park told the parliamentarian that development activities are being carried out by the Urban Development Authority.

Bandara queried the delayed action of ministers, government politicians, the and the Urban Development Authority in taking action against the development project.

“They are claiming that there are only a few trees at the park. That is a blatant lie,” he told reporters pointing out that the remaining tree trunks tell the tale of destruction.

The opposition parliamentarian recalled that an ancient King’s Court in Kurunegala had also been demolished under the aegis of the municipal council in the area.