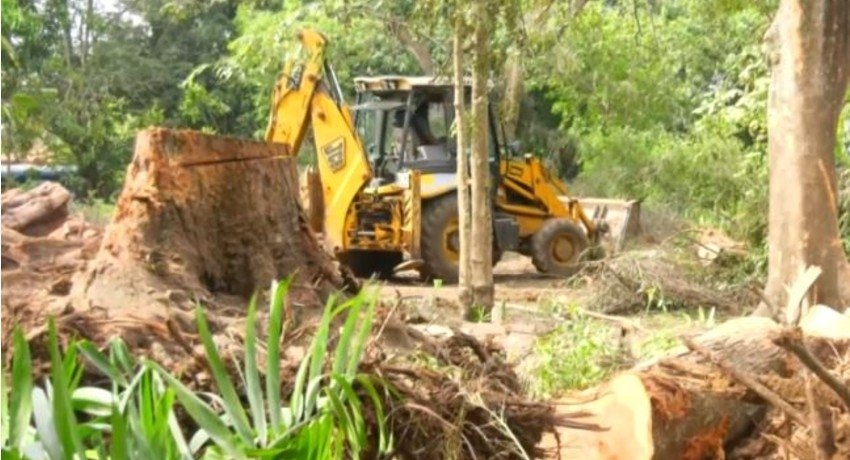 Colombo (News 1st); The Central Environment Authority on Monday (04) was ordered by the Environment Minister to provide a report on the destruction caused to the Rajaphililla Park in Kurunegala.

A press release by the Environment Ministry noted, 28 trees were cut down inside the Rajaphililla Park in Kurunegala and the Minister had called for information if the CEA or its district representative had approved the felling of trees in the premises.

The Minister said the government was criticized widely across the social media following news reports on the large-scale deforestation which had taken place on the basis of a certain development project.

Environment Minister Mahinda Amaraweera had said the prevailing COVID-19 situation in the country had paved the way for certain individuals to engage in the illegal felling of trees and therefore it is paramount to investigate such events.

On Saturday, the 02nd of January News 1st highlighted that the Rajapihilla Park in the heart of Kurunegala had fallen prey to another so-called development drive.

It is no secret, the Rajapihilla Park is a place used by thousands of visitors daily to take a break from their daily routine.

“Thirty-two trees have been cut down in total,” Ranuka Sananjaya, a member of the Janatha Vimukthi Peramuna in the Kurunegala Municipal Council said.

Although 28 trees had been earmarked to be cut-off as part of the development plan, News1st learns that 32 trees have already been chopped off.

An ancient structure of archaeological value has also been demolished at the park.

Local residents say that development activities have damaged the natural landscape of the centuries-old park.