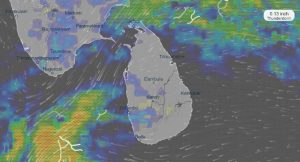 Further, many roads in the suburbs of Colombo experienced heavy traffic as a result of the heavy downpour, and motorists are advised to exercise caution and use alternative routes.

Showers or thundershowers will occur at several places after 1.00 p.m in Sabaragamuwa and Western provinces and in Galle, Matara, Kandy and Nuwaraeliya districts, it added.