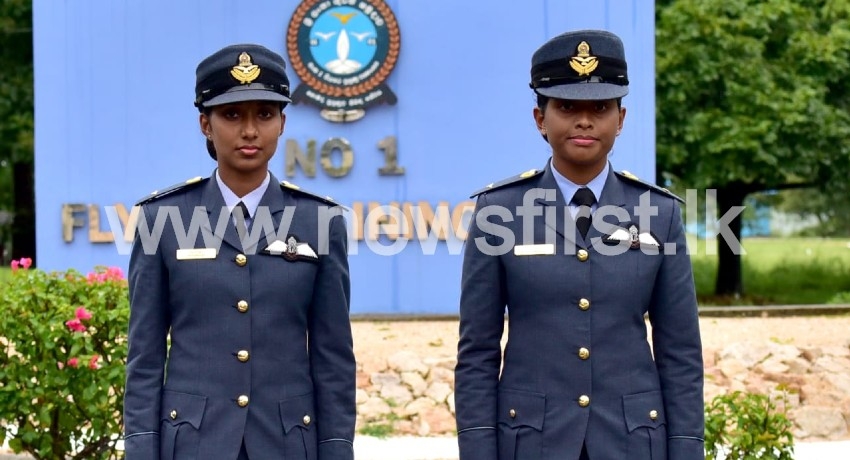 Colombo (News 1st); It was a moment of utmost pride and patriotism for the Sri Lanka Air Force when it held the Commissioning and Wings Parade of the 61st Intake of Officers Cadets, 13th Lady Officer Cadets Intake, the No 33rd and No 34th Kotelawala Defence University Intakes on Monday morning (16 November 2020) at the SLAF Academy in China Bay.

This was the culmination of nearly three years of intensive training and hard work by the officers who were from different branches such as General Duties Pilot, Technical Engineering, Electronic Engineering, Logistics, Administrative Regiment and Operations Air. Having begun initial training at the Combat Training School in Diyatalawa for 21 weeks and at the Kotelawala Defence University for almost three years respectively, these officers subsequently followed their Basic Administrative Courses and respective branch training at the Flying and Ground Training Wings in China Bay and the Combat Training School at Diyatalawa.

Another highlight of today’s parade was when the parade was handed over to the newly commissioned Officers to command.

Today marked the first instance in the history of the Sri Lanka Air Force when a Lady Officer commanded a parade with the Presidents Colour. Pilot Officer RT Weerawardana had the honour of being the first Lady Officer to do so when she took over the parade as the new Parade Commander.

On the invitation of the Commander of the Air Force, Air Marshal Sudarshana Pathirana, taking the salute as the Chief Guest at this prestigious occasion was the Secretary to the Ministry of Defence, Major General (Retd) Kamal Gunaratne.

The day’s proceedings began on a grand note with the Commissioning Parade led by the Commanding Officer of the Ground Training Wing at China Bay, Group Captain Udaya De Silva marching on to the Parade Ground.

The parade which consisted of three Squadrons, 9 Flights and the President’s Colour received the Chief Guest with a Ceremonial General Salute.

The next highlight was during the awarding of Flying Brevets and trophies for special achievements. For the first time in the history of the Sri Lanka Air Force, Pilot Officer ADPL Gunarathe and Pilot Officer RT Weerawardana became the first Lady Officers to be awarded the prestigious Flying Brevet and be the pioneering female military aviators of Sri Lanka.

Pilot Officer RT Weerawardana created history yet again when she was awarded the prestigious “Sword of Honour” presented by Group Captain NR Raheem.

The sword of honour is awarded to the Officer Cadet who has achieved the highest results in both academic and professional studies, and who has shown the best all-round performance throughout the course.

This is the first occasion in the history of the Sri Lanka Air Force when a Lady Officer has been awarded the “Sword of Honour”.

The Wings and Commissioning Parade was followed by an exhilarating aerobatics display by the Blue Eagles Aerobatics Team from the No 1 Flying Training Wing at China Bay.

The Aerobatics Display Team was led by Wing Commander Prasanna De Silva, the Officer Commanding Flying at the No 1 Flying Training Wing. The Air Force Ceremonial Band together with SLAF Colour Wing Drill Display Team performed next adding colour to the days proceedings.

The courageous Air Force Para Troopers conducted an exciting Para Display and landed at the Parade Ground immediately after the Band and Drill Display. 10 Para Troopers including two airwomen led by the Commanding Officer of the Air Force Para School in Ampara, Squadron Leader Sumedha Ritigala mesmerized the spectators present for this milestone event of the Sri Lanka Air Force.

Members of the Air Force Board of Management together with their spouses, a limited number of Senior Officers of the SLAF, Officer and Other Ranks for the Air Force Academy in China Bay participated for todays Parade. 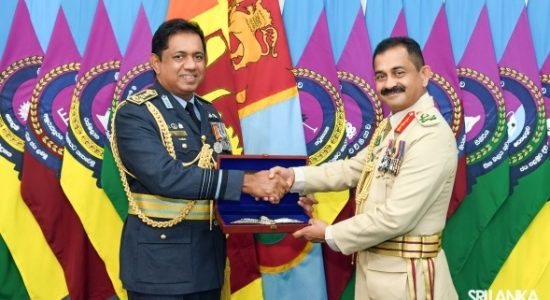