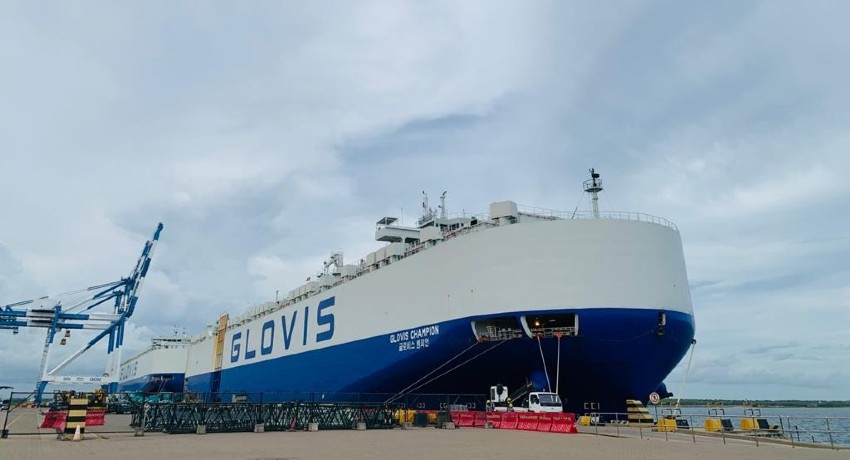 Colombo (News 1st); The Hambantota International Port’s (HIP) RORO operations in the last 2 months has seen a rapid increase in numbers. This is a direct result of the aggressive marketing plans implemented by the Hambantota International Port Group (HIPG) in the first half of 2020. The company’s strategy is now paying dividends with the transshipment of thousands of vehicles via Sri Lanka’s southern port.

The vehicle carrier m.v. “Glovis Champion” docked at HIP on 5th November, discharging 3,869 vehicles from Korea, Japan and China for transshipment to the Middle East.

Another 5,560 vehicles which had come from India bound for Veracruz in Mexico, were loaded onto the vessel.

Bindu Ranasinghe, Assistant General Manager Commercial and Marketing, HIPG says, this is a vast change from the state of affairs at the beginning of the year, “between the months of March and July we saw a drastic drop in numbers because of the lockdown we faced and the closures worldwide.

This change therefore is a very welcome one. This is also the highest move count that HIP has handled in the year 2020 and second highest overall.”

HIP’s hub port status for RORO in this region, is well positioned with vehicles coming in from Korea, Japan, India and China, discharging for transshipment in Hambantota.

The receiving ports of these vehicles are in Central and South America, East and South Africa and the Middle East. Bindu Ranasinghe says, “Our operations have expanded into used cars going through the port as well and in addition there are several new lines and services being added to the HIPG portfolio.”