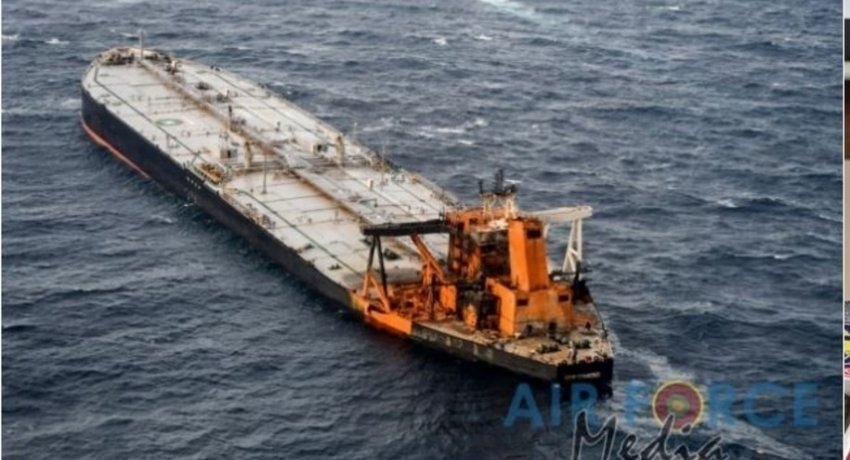 On Friday (02) it was reported the The Maritime Rescue Coordinating Centre (MRCC) yesterday authorized the owners of the crude oil tanker, ‘MT New Diamond’; to tow the vessel out of Sri Lankan waters, although Marine Environment Protection Authority (MEPA) opposed the move.

Permission was granted to commence operations to tow away distressed crude oil tanker, the MT New Diamond, based on the assurance the claims made by Sri Lanka are paid, said Captain Indika De Silva the Spokesperson for the Sri Lanka Navy on Friday (02).

It is reported, it would take at least two months for the MT New Diamond to be towed-away from Sri Lankan waters.

MEPA Chairperson Darshani Lahandapura confirmed to News 1st, permission was not granted to tow-away the distressed crude oil tanker, the MT New Diamond, from Sri Lankan waters on Thursday (02) and on Friday (01) she said the ship is to be moved inside Sri Lankan territorial waters.

On Thursday (01) Attorney General Dappula De Livera had informed the Marine Environment Protection Authority the negotiations pertaining to the claim regarding the marine pollution caused by the distressed crude oil tanker, MT New Diamond, are pending and other claims are yet to be settled.

On the 26th of September, The Owners and Salvors of the distressed Crude Oil Tanker, the MT New Diamond, informed Attorney General Dappula De Livera of their agreement to immediately settle in full the claim of Rs. 442 Million.

Speaking to News 1st on Thursday (01), State Counsel Nishara Jayaratne, the Coordinating Officer to the Attorney General said the  Marine Environment Protection Authority had also informed the Attorney General of the fact the relevant authorities have been informed and instructed, that approval permitting the MT New Diamond to leave Sri Lankan waters will only be granted after the negotiations are completed regarding oil pollution damage.