He made these remarks during his testimony to the Presidential Commission of Inquiry probing the 2019 April 21st Attacks.

In a testimony, former police chief Pujith Jayasundara said former president Maithripala Sirisena had instructed the police to stop probing Islamist extremism and had vested the task with the State Intelligence Service alone.

He added that the then SIS director Nilantha Jayawardena had written to him informing that  local and foreign intelligence units were carrying out a probe into Zaharan Hashim who was later identified as the mastermind of the bombings.

According to the witness, Jayawardena had informed that the Terrorist Investigation Division’s involvement may become an obstacle to those investigations.

The witness said he had faced difficulties in executing his duties due to unnecessary political intervention and the rift between the president and the prime minister under the previous government.

He told the presidential commission probing the 2019 April 21st attacks, the two leaders had issued contradictory advice in some instances to take the relevant decisions.

Jayasundara added that former president Maithripala Sirisena had barred him from attending National Security Council meetings since the 23rd of October 2018.

He said this was due to the rift created between them over their opposing views on the transfer of police inspector Nishantha Silva who had been attached to the Criminal Investigation Department.

The presidential commission said it would issue an order tomorrow over a complaint filed against former president Maithripala Sirisena’s statement refuting certain remarks in the testimony of former defence secretary Hemasiri Fernando.

President’s Counsel Maithri Gunaratne appearing for the former president’s private secretary Samira de Silva argued that his client had issued the statement to protect his employer.

He informed that the statement had been removed from the Facebook page of the former president after a complaint had been filed citing it as a move that disrespects the commission and intimidates the witness.

Attorney-at-law Duthika Perera appeared for three auxiliary bishops who had issued a statement on behalf of Colombo Archbishop Cardinal Malcolm Ranjith refuting certain remarks made during former minister Harin Fernando at the commission.

He denied claims that the statement issued by his clients could be compared with that of the former president since the witness has not raised objections against it.

The commission ordered former president Maithripala Sirisena, his private secretary and the three auxiliary Bishops to appear at 10:30 am tomorrow when an order is issued over the complaint. 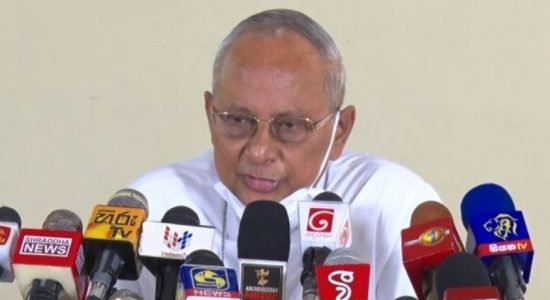