Colombo (News 1st);  ‘VIKAARI’, a Sri Lankan short film by Sandun Seneviratne and British Filmmaker Charlie Bray was selected to be screened in competition later his year at the Screamfest Horror Film Festival, one of the worlds biggest genre festivals.

‘VIKAARI’ becomes the first Sri Lankan film to be selected by Screamfest, placing it in legendary company with horror sensations such as ‘Paranormal Activity’ and ‘The Grudge’ which made their premiers in previous years.

Often referred to as ‘The Sundance of Horror’, legendary directors such as Clive Barker, Wes Craven, and John Carpenter sit on the advisory board while the coveted trophy was designed by the late Stan Winston, master of special effects on many classic Hollywood movies.

Revolving around the widespread birth of babies with similar deformities, the movie follows the ensuing worldwide panic. The children, nicknamed Vikaari, all share a remarkable set of characteristics and may even possess, paranormal abilities.

Vikaari, will premier at Screamfest in LA in October of this year. 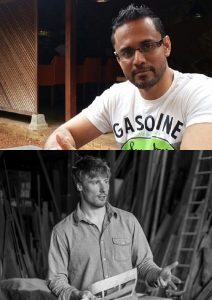