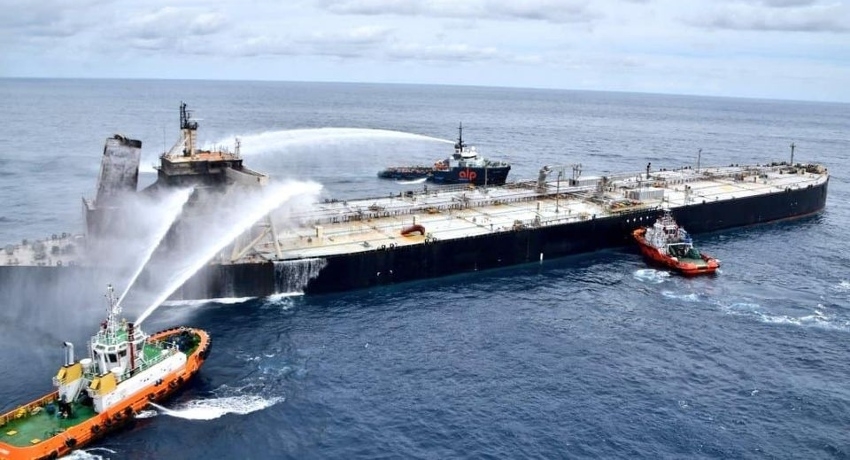 Colombo (News 1st);  It would take another two more days to completely douse the onboard fires on the distressed Crude Oil Tanker, the MT New Diamond, said the Sri Lanka Air Force.

Spokesperson for the Sri Lanka Air Force Group Captain Dushan Wijesinghe speaking to News 1st said an additional 1000 kilograms of Dry Chemical Powder (DCP) was dropped on to the distressed vessel to smother any re-ignited flames.

” As the temperatures aboard the vessel had reached a high level, it would be impossible to completely douse the fire inside the vessel,” said the Air Force Spokesperson adding they are yet to drop Dry Chemical Powder (DCP) and other Chemical material into the interior of the distressed Super Tanker.

Sri Lanka Navy Spokesperson Captain India De Silva said the team of experts, including salvage operations experts, assessors and a legal adviser who arrived in Sri Lanka, under the facilitation of the company that works as the commercial and technical operator of MT New Diamond, have reached the site of the distressed Super Tanker.

In addition, another group of experts arrived at the Mattala International Airport on Sunday (06) night for salvage operations on the MT New Diamond.

The company is currently sending equipment and experts in crude oil disaster management to MT New Diamond to commence the salvage operation.

Further, another group of experts comprising representatives from the Department of Oceanography and Marine Geology of the University of Ruhuna, National Aquatic Resources Research and Development Agency (NARA) and Marine Environment Protection Authority (MEPA) are to reach the distressed Crude Oil Tanker for inspections and assessments.

The Department of Fisheries had urged the fishing community to refrain from entering the area where the MT New Diamond is currently positioned.

Nearly 79 hours after the distress was reported, the Sri Lanka Navy and other stakeholders including the Sri Lanka Air Force, Sri Lanka Coast Guard, Sri Lanka Army, Marine Environment Protection Authority, Indian Air Force, Indian Navy, Indian Coast Guard, were able to bring the fire under control at around 3.00 p.m. on Sunday (o6th) evening, as a result of their strenuous firefighting effort.

The distressed oil tanker in eastern seas was manned by 23 crew members including 5 Greeks and 18 Philippine nationals, one of them is feared to be dead inside the distressed supertanker.

It is also reported that 1700 metric tons of diesel required for the use of the tanker is also stored onboard.