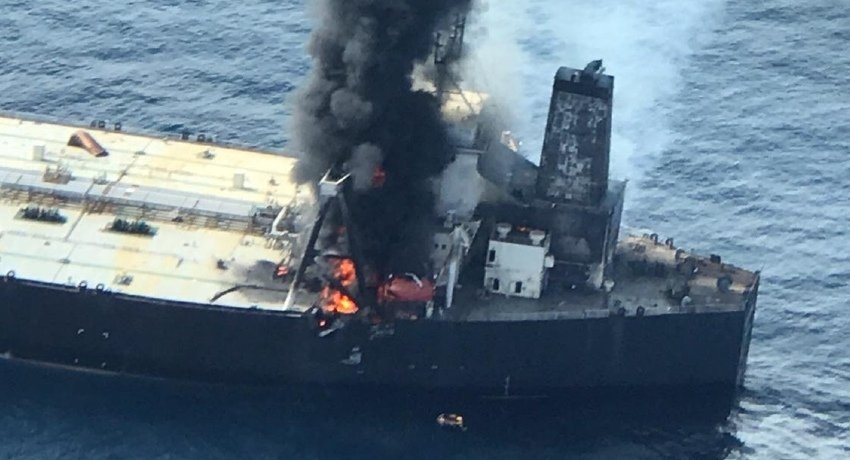 Officials said the distressed supertanker now lies about 35 nautical miles away from the Sri Lankan coastline.

As a result of a combined operation the ill-fated Crude Oil Tanker was secured from all sides.

Although the MT New Diamond had reached a distance of about 20 nautical miles by 1800 hours on Friday (04th September 2020), the ALP Winger, a tug, began taking the ship to the deep sea as fire was contained.

The fire has been contained to a certain extent by Saturday (05) and the Dornier aircraft are currently at the Mattala International Airport.

As of now, 04 capital ships and 03 Fast Attack Craft of Sri Lanka Navy, 02 ships belonging to the Sri Lanka Coast Guard, 03 ships of Indian Coast Guard, 01 ship belonging to the Indian Navy, 02 tugs of Hambanthota International Port Group – Wasaba and Rawana, the ALP Winger tug, the TTT One tug with firefighting equipment and professionals have been engaged in the firefighting efforts.

Meanwhile the MI 17 helicopter and the Beach Craft of the Sri Lanka Air Force also resumed their aerial operations to assist this combined effort.

Sri Lanka Air Force also said a Y12 Aircraft was deployed on Saturday (05) to observe the situation aboard the MT New Diamond.

The continuous cooling effect during the disaster relief operation has controlled the fire-spread and approaching of the flames to the crude oil store of MT New Diamond. As a result, there is no risk of an oil spill so far, confirmed the Sri Lanka Navy.