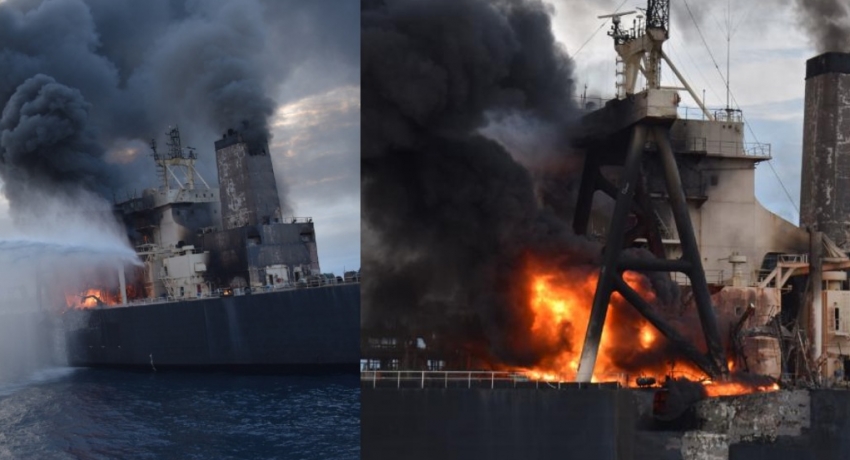 MT Diamond – All measures in place to counter any worst-case scenario: SL Navy

MT Diamond – All measures in place to counter any worst-case scenario: SL Navy

COLOMBO (News 1st): Sri Lankan authorities on Friday (Sep 04) revealed that ‘MT New Diamond’ crude oil tanker sailing under the flag of Panama and currently in distress due to a fire reported aboard the vessel, belonged to ‘PORTO EMPORIOS’ shipping inc.

“So far, there is no risk of any form of an oil spill from the MT New Diamond. It is still located 22 nautical miles away from the coast of Sri Lanka. Further, it is being dragged away towards the South, by the water current. The main aim of the operation is to douse the fire aboard the ship and prevent any new fires from erupting,” Real Admiral Nandana Jayaratne, the Director-General Operations of Sri Lanka Navy said.

Real Admiral Nandana Jayaratne further said that Sri Lanka Air Force, three capital ships of the Sri Lanka Navy, one capital ship of the Indian Navy, and the Indian Coast Guard have joined the efforts to douse the fire.

Also speaking at the media briefing in Colombo on Friday (Sep 04), was Attorney-at-Law Dharshani Lahandapura, the Chairman of the Marine Environment Protection Authority (MEPA), and she said: “In the case of an emergency oil spill, MEPA is prepared with 15 other institutions to avert any harmful impacts”.

“In the case of an oil spill, 270,000 metric tonnes of oil could mix into Sri Lanka waters, which would be a massive environmental disaster; the capabilities and resources of Sri Lanka to address such a situation are very low,” Attorney-at-Law Dharshani Lahandapura emphasized.

According to MEPA, through the Disaster Management Centre, the fishing community will be informed to stay at least 5 nautical miles away from the vessel as the fire could emit harmful gases.

“We are also in the process of preparing for legal action based on instructions of the Attorney General, in the case of a massive oil spill,” Chairman of MEPA, Attorney-at-Law Dharshani Lahandapura noted.