Colombo (News 1st); The United National Party says UNP Leader Ranil Wickremesinghe at a meeting with Ex-Parliamentarians and Party Seniors on Monday (10) made it clear the party needs new leadership.

According to a statement from the UNP, Wickremesinghe had informed those at the meeting to discuss the matter with the respective groups and thereafter convey it to the next Working Committee meeting.

It adds, Wickremesinghe had pointed out the need for a mechanism for an over-all restructuring of the UNP and to move towards a victorious path. 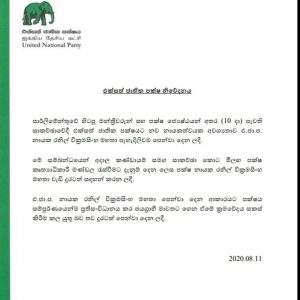