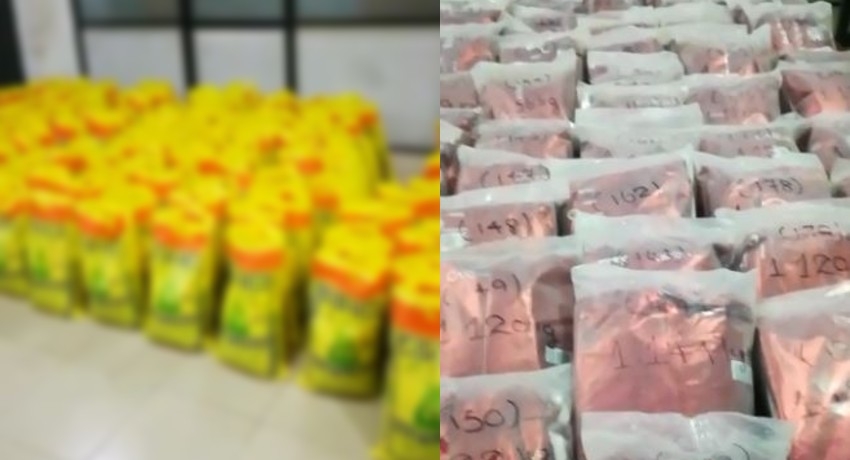 Colombo (News 1st); The Police Narcotic Bureau said from the 01st of March 2020, almost 800 kilograms of heroin were seized in multiple police operations.

The latest heroin bust took place on Thursday night when the Police Narcotic Bureau seized 225 kilograms and 969 grams of heroin and arrested 04 suspects in a raid carried out in Welisara, a suburban area in the Western Province.

The haul of heroin was concealed inside rice bags and a luxury car and SUV were seized by police.

According to Sri Lanka Police, the street value of the narcotics is over 2.3 BILLION Rupees.

DIG Sajeewa Medawatte who is in charge of the Police Narcotic Bureau speaking to reporters said the main suspect is a drug peddler who is already in prison for a drug offense.

He added a close associate of the main suspect had facilitated the finances for the drug operation and he too was arrested.

DIG Sajeewa Medawatte said the suspects had attempted to distribute the drugs across the country by using vehicles with the “Essential Services” sticker, as they were denied curfew passes on numerous occasions.

He said according to intelligence received, the haul had entered Sri Lanka by sea from Afghanistan and Iran via the Southern Seas and made their way to Kandana.

All 04 suspects are to be interrogated on detention orders and others connected to the operation would also be arrested.

DIG Medawatte said drug traffickers are going to great lengths to continue their illegal operations even during curfew time.