COLOMBO (News 1st): The people of Lahugala in Ampara earn a living by farming. However, they have been severely inconvenienced due to wild elephants. Area residents say that the elephants attack homes in which paddy reaped during the harvesting season had been stored. The latest attack had taken place last evening (April 4). The area residents complain that they find it difficult to even find food due to this troublesome situation.

The Sadamaeliya village in Thambuettagama has also been affected due to the threat posed by wild elephants. Banana and coconut trees were among the cultivations that had been destroyed.

Area residents said that elephants emerging from the Kuda Gal Vihara reserve have caused such destruction. Residents say that it is quite difficult to stay at home during the curfew as a result of this situation.

Meanwhile, the fishermen in Chilaw have decided to temporarily refrain from going out to sea until further notice. Chairman of the Chilaw District Fisheries Organization, Roshan Thushara Fernando said:

“All fishermen in Chilaw have decided to temporarily abandon this job. As of now people from different areas are coming to the Chilaw fish market. We have made this decision collectively to support the government”

In keeping with this decision, around 10,000 fishermen across 15 villages between Karukapane and Iranawila in Chilaw refrained from going out to sea.

“It is now in a state where if one patient is reported, they shut down the entire village. Before it goes any further, we must think. We have been doing this job a long time and are patriotic citizens of this country. Therefore we make a request of the fishermen in this country, to support the efforts of the authorities and to stay protected at home. We ask that they stop engaging in fishing until further notified.”

Meanwhile, fishermen in Matara have been inconvenienced as a result of the difficulties in transporting fish. They say that this situation had arisen since permission has not been granted to use the expressway to transport fish.

Finding food has become a problem for animals as much as it has become an issue for human beings. Local clergy and youth came forward to help feed animals in the 18 bend area of Mahiyangana.

Usually, these animals are fed by tourists in the countless vehicles that pass one of Sri Lanka’s more popular tourist attractions. This effort is supported by the Dehigella Sri Poorwarama Raja Mahaviharaya in Mahiyangana, it’s Chief Incumbent, the Ven, Ambale Rathana Thero and youth in the area.

Meanwhile, animals near the Gal Viharaya in Polonnaruwa were also given food today. The initiative was taken by a group of youth in Kuruppu junction in Polonnaruwa. 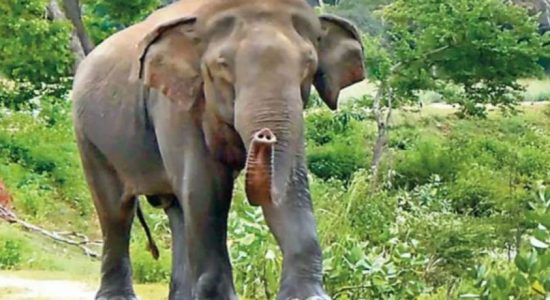 Several villages in a sad plight due to elephants

Several villages in a sad plight due to elephants

Sena caterpillar is an effort to cripple the Govt.