COLOMBO (News 1st):- Former Opposition Leader Sajith Premadasa says that the country will face losses worth US$ 20 billion by 2025 due to the low participation of women in the labour market. He made these remarks during an event organized in Moratuwa today (March 8).  The event was organized by parliamentarian Hirunika Premachandra in line with the International Women’s Day.

Speaking at the event, Leader of the Samagi Jana Balawegaya, Sajith Premadasa said;

“Much is spoken about gender equality. However, according to global surveys, our country will incur a loss of USD 20 million by 2025 due to the less participation of women in the labour market. Around 20% of women in the private sector experience salary anomalies between genders. In the foreign employment sector, the participation of women is 34%. Out of that 80% are employed as domestic servants. Females feel insecure due to sexual violence, and as they are given low wages and lack of skills. It would be appropriate to say that females are being treated as slaves.”

“According to the 2018 gender gap report, Sri Lanka has been ranked 91st in terms of gender inequality. When speaking about female hygiene, no one comes forward to speak about cervical cancer and urinary tract infections. However, during the presidential election, I made a proposal concerning personal hygiene. We know that the truth will win one day. Scotland has implemented my proposal recently. When we speak about this, they will sling mud at us. However, I wish to say that the Premadasa’s are not afraid of speaking and implementing the truth. The topic of national security is widely discussed. If parents are protesting demanding justice over the abuse of a girl, what is the level of security in the country?”

Meanwhile electoral Organiser of the UNP, Hirunika Premachandra had this to say;

“There was a problem in the recent past. If my husband had not stood straight, I wouldn’t have been able to face this situation. I was insulted as I was a woman. That channel is here as well. The brother of the owner of this channel is connected to my father’s death. He is now serving a death sentence. Audiotapes involving individuals connected to my father’s death are being leaked. This includes the judge who delivered the verdict regarding this case. Audiotapes involving police officers who investigated my father’s death are also being leaked. Further, audiotapes of journalists who wrote extensively about this incident were also leaked. Although there were around 124,000 recordings of telephone conversations, only a few recordings are coming out.”

She continued to say;

“Demands were then being made to release this person. Now there are no more recordings being released as it was done before February 4. Mark my words, this will happen when the day of Vesak is nearing. There are two media institutions which are laundries. Where is this country heading considering the personal objectives that are in play? We handed over our government to them after a five-year rule on a silver platter. They came into power not because of their strength, but because of our weakness.” 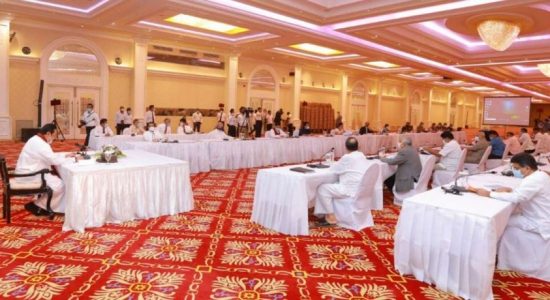