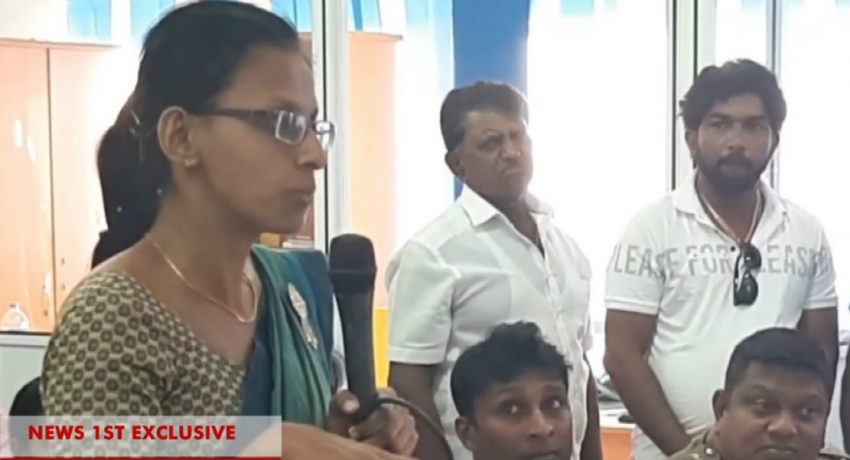 Colombo (News 1st): A tense situation has arisen over a request made to construct a volleyball court at the Queen’s island in Negombo with a high density of mangroves. The tense situation arose at the auditorium of the Pitipana Fisheries harbour when a group of villagers demanded that the island be provided for a volleyball court to be constructed.

State Minister Sanath Nishantha: This is required to construct a ground for the children to play.

District Forest Officer of Gampaha B. Devani Jayathilake: This cannot be provided. This is in an ecosystem. There is a target in Sri Lanka that has been set to become the Champion in Asia when it comes to mangroves. We are short of 10,000 hectares. When you speak about illegal establishments, our lands have been completely taken over. I even spoke to the Mayor in this regard. Let’s implement a project and build a flat for the people and get them settled there.

State Minister Sanath Nishantha: When compared to other countries in the world, ours is a small country. If we oblige law when it comes to wildlife, wildlife conservation, and coastal conservation, our people will not be left with land to live. My suggestion is that you be a bit more flexible and resolve this issue.

District Forest Officer of Gampaha B. Devani Jayathilake: This is a government’s forest reserve.

District Forest Officer of Gampaha B. Devani Jayathilake: There’s 60% of forest density in upper regions. Gampaha has the lowest forest density of 1.6%. The Wildlife owns only 18 acres. Even in that, we have only 1086 hectares. Even these hectares of land are being distributed. Who is responsible? We don’t have sufficient oxygen for respiration.

Bystander: There is no need for Oxygen.

District Forest Officer of Gampaha B. Devani Jayathilake: They say there is no use in having Oxygen. You think about it. Decide if we are going to make a scientific decision or let people living in villages make decisions as they please. Otherwise, there is no use of us studying all of these and coming into these positions.

State Minister Sanath Nishantha: You represent the government. We cannot move forward while having conflicts with the people and fishermen. We have to do this in a friendly manner. So its better if we can do this in a peaceful way.

District Forest Officer of Gampaha B. Devani Jayathilake: But what I’m saying is that nothing can be done against the law.

A generation that is competitive, and healthy is created through sports. The mangroves are important to protect the estuaries, the banks and the ecosystem surrounding it. The Gampaha District Forest office is of the stance that protecting this ecosystem is invariably equal to protecting the country.

The villagers question as to how a hotel is being constructed on an adjacent land similar to this when the villagers have not received a plot of land for a playground.

State Minister Sanath Nishantha: The state official said that the Rs 700 million project cannot be carried out until the sand is removed. Nobody can stop the development of the country. If this is being used to humiliate us on social media, we will have to rethink about it. They want the sand to be removed.

Journalist: Is it a government’s forest reserve?

State Minister Sanath Nishantha: Yes it is government’s. If there are mangroves, in any plot of land, they belong to wildlife conservation.

Journalist: Can a government forest reserve be used as a playground?

State Minister Sanath Nishantha: No, we have not made a request to free it. I also didn’t make a request. What we are saying is, let the children play, while we continue the Rs 700 million project which has been going on for over 6 to 7 years. We are not hoping to stop this just because such an incident occurred. We will continue with the project.

Minister S.M. Chandrasena commenting on the matter noted that nobody can obtain even an inch of state-owned land, without the approval of the parliament. Therefore he said Minister Sanath Nishantha must have made that request without knowing the wildlife act. He stated that the state official of wildlife explained the real situation and as the subject minister he regrets the conversation that took place the other day.

The Minister said if someone has done a filling unnecessarily violating the act, they will not hesitate to do the needful. He noted that what the state official did is right. He pointed out that they need to have officials who safeguard these places and officials should inform the ignorant politicians. He said that he will take responsibility.

Journalist: The same set of people will be elected again.

Minister S.M. Chandrasena: So the people appoint them. If nominations are given to people like that, no one will be left.