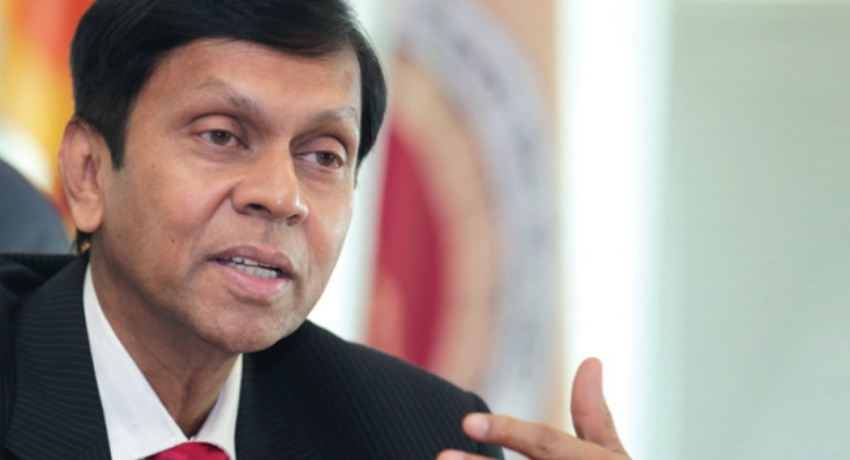 Colombo (News 1st): Former Governor of the Central Bank and current Senior Economic Advisor to the Prime Minister, Ajith Nivard Cabraal says, all probes which were conducted into the Central Bank Bond Scam, including the Forensic Audit Report which was released, had not been carried out in an independent manner.

Addressing a media briefing held at the Temple Trees today, he said, since an organized crime had taken place during the bond transactions, it should be investigated by the Police.

“The Forensic Audit reports state that several relatives of mine had held various positions. It was not because of my position as the Governor of the Central Bank, that they were assigned those positions.  Nihal Fonseka is a stalwart in the banking sector. He was the Managing Director of DFCC Bank. Amal Cabraal is a former Director of HNB. Shivani Thambaiyyah who is my niece is the MD of the Renuka Hotel Group. Sunil Wijesinghe is my brother in law. The report states he is the Chairman of NDB. Ranil Wijesinghe is a director of the Bank of Ceylon. That is the allegation I have against me. Dhara Wijethilaka is my wife’s sister. Claims have been brought up against me saying that she was at Sampath Bank. Chathura Cabraal is my son. The claim he has against him is that he was part of the board of directors at Vallibel Power and Fortress. Then the Forensic Audit report connects it to Dhammika Perera. They claim my sister Shiromi Perera was employed at Perpetual Capital Holdings. She resigned from her position on the 8th of March 2015, the minute she heard about the Bond Scam. She has acted in an honorable manner. She has not stolen a cent. My wife, Roshini Cabraal was the Deputy Chairman of Lanka Hospitals. For some reason that too is included in the report. These are my family members. Ravi Thambaiyyah is the Chairman of the Renuka Hotel. I trust my family members. They are professionals. My father is a doctor. There is however one person who is connected to the Bond Scam who happens to be related to me. That is Ranil Wickremesinghe. I am revealing that today. I am somewhat ashamed to say it. However, I will boast about the rest of my family members.”

Ajith Nivard Cabraal also spoke regarding the firms which had prepared the Forensic Audit Reports.

Ajith Nivard Cabraal: Both the firms which conducted this audit are from India. One is KPMG India and the other is BDO India. Look into these two firms on the internet. Both firms have major allegations against scams which those firms had carried out. The Central Bank had appointed those firms against such a backdrop. One allegation is bribery and because of another allegation, the Indian Government had said that they will ban KPMG India for a period of 5 years. While the Indian Government is acting in such a manner against an Indian company, the Central Bank of Sri Lanka assigns them to conduct forensic audits. My opinion is that this should be handed over to the Police. This inquiry should be done through the Police.

Journalist: When will a just investigation into this matter be conducted?

Ajith Nivard Cabraal: The Police have all these details. Police can question the necessary parties. They have the power to do so.

Journalist: Can’t you lodge a complaint at the Police?

Journalist: If we are to follow that argument, the same argument can be used when talking about the tenure of Arjuna Mahendran.

Ajith Nivard Cabraal: But this is what you have been revealing all this time. Do you not like to include this? If that is the case, its alright.

Journalist: There is no such issue

Ajith Nivard Cabraal: It seems to me that there is. Its fine, if you do not want to speak regarding it, it’s fine.

Journalist: According to how you are explaining this, the Central Bank cannot conduct a forensic audit at any point of time due to the situation that is prevailing in the country.

Ajith Nivard Cabraal: No. The report of the Bond Commission has made a remark regarding a forensic audit being conducted. If that is to be done, who should do it? The Auditor-General.

Journalist: In your opinion, what is the most suitable institution to examine this matter?

Ajith Nivard Cabraal: It is the Police. If the Police want any professional help they can request for it.

Journalist: Let us assume this Government commences a Police investigation regarding this, tomorrow. Now, you are the Senior Economic Advisor to the Prime Minister. How certain can we be that the irregularities that occurred during your time as the Governor would be revealed?

Ajith Nivard Cabraal: Your channel will not believe it.

Journalist: This is not an issue relating to the channel

Ajith Nivard Cabraal: That is the issue. The probe should be conducted in a manner where the people of the country would believe it. That is what I am saying.

Journalist: What we are talking about is a loss that has occurred in a public fund.

Ajith Nivard Cabraal: A loss has not occurred, although it is not accepted. There was an unrealized profit. They say it’s a hypothetical loss, we say it is a hypothetical profit.

Journalist: Based on your argument there cannot be an issue.

Ajith Nivard Cabraal: Allow me to state my opinion

Journalist: This cannot happen. You cannot find one thing right another wrong.

Ajith Nivard Cabraal: I understand that you have to carry out your duty. Even your Chairman has told you to come and bother us. That is fine. Let me explain. Because of this, it is an issue for you. You can score some points after saying these. That is not an issue.

When News 1st exposed the Central Bank Bond scam in 2015, many were the brickbats that were hurled at us at the time.

However, we stuck stubbornly to the facts and reported the truth. Ultimately our reporting was vindicated when the whole nation began to understand the enormity of the crime that was committed against the people.

It is with the same disdain in that we treat Mr Cabraal’s feeble attempts to divert attention from what he has been accused of doing; misusing innocent people’s savings.

While he has gone to great lengths to explain his position, even going as far as claiming to be a relation of Ranil Wickremesinghe, we remain committed to reporting the truth and exposing the facts.

And quite often the truth hurts.

The blame game is to distract people: Wasantha Samarasinghe

Speaking regarding this JVP Politburo Member Wasantha Samarasinghe noted that Ranil Wickremesinghe took care of Mahinda Rajapaksa’s family when he was in power and now Mahinda Rajapaksa is taking care of Ranil Wickremesinghe and his relatives. He said, therefore, the Bond Scam thieves, who robbed the earnings of the people, are pointing the finger at each other to distract people.

Samarasinghe noted that if the President wants to show that there is no room for thieves and rogues, he can take immediate steps now. He added that if you say former CEO Kapila Chandrasena and his wife should be arrested, do it now. He went onto note that the forensic audit has mentioned the perpetrators involved in the bond scam. He requested the relevant authorities to take the necessary actions and intervene in the process if not, he said the EPF rogues will roam free.