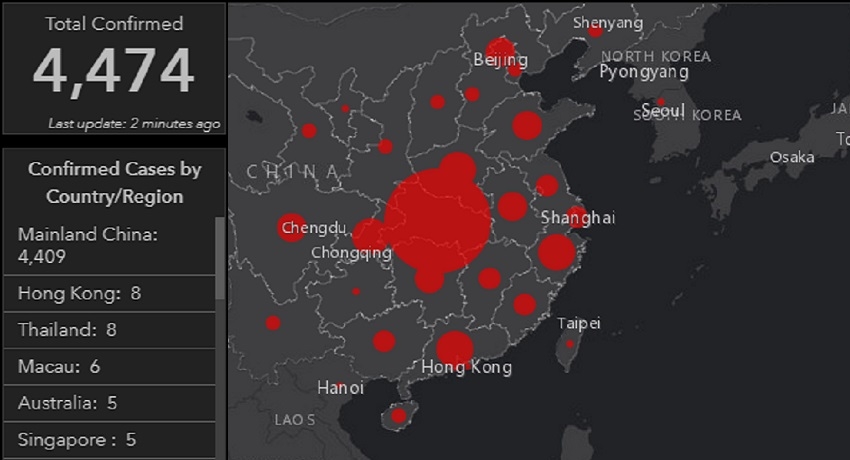 Colombo (News 1st): An aircraft left Sri Lanka this evening, to repatriate 33 Sri Lankan students trapped in Wuhan, China which is in lockdown since the first case of the Corona virus outbreak was reported.  Speaking to News 1st, a source from SriLankan Airlines said UL 1422 was dispatched to Wuhan, China with a specially trained staff on board.

Minister of Healthcare and Indigenous Medical Services Pavithra Wanniarachchi noted that the special aircraft would most likely return to Sri Lanka with the students today. She added that all staff onboard the airline have been provided with personal protective equipment and the Military is on stand-by to escort the group to the terminal dedicated to those arriving from China at the BIA.

She said the complete responsibility has been taken up by the military. The Minister noted that thereafter, the group would be sent in a bus to Diyathalawa where a Special Medical Centre with 34 rooms is set up to provide treatment to them. She noted that the bus is equipped with all the facilities and a few rooms with attached bathrooms also have been built at the camp. She believes that the Badulla hospital is equipped with all the facilities.

The Civil Aviation Authority said that it has undertaken several steps to ensure that the disease does not enter the country through flight passengers. Meanwhile, the health condition of the Chinese woman who had been diagnosed with Corona virus in Sri Lanka is showing positive signs of improvement.

Meanwhile, the Health Ministry announced today that people residing in the vicinity of hospitals are not in grave danger of contracting the disease. Deputy Director-General of the Health Ministry Dr Paba Palihawadana noted that the virus could be spread while an infected person is speaking or sneezing.

The Health Ministry quoting Dr Palihawadana noted that the National Institute of Infectious Diseases or World Health Organization have not instructed the public to wear face masks. The statement added that it would be sufficient for those associating with infected patients to wear face masks.

The institute has been vested with the facilities of detecting the Corona virus but the Institute had only received 15 samples to carry out the tests to detect the virus.

“This building is 30 years old. The building which was initially built to house 9 departments now holds 24 departments. This has to be expanded furthermore. Although we are conducting the research at a successful rate as of now, this Institute has to be developed soon. Cabinet approval has been sought to do that and the relevant proposals we put forward to the Ministry of Health have been passed. Now we will hold discussions with the Government and focus our attention on constructing another building and carrying out the research successfully by using the latest technology. The current facilities of the Institute should be upgraded with immediate effect.”

Leader of the Opposition Sajith Premadasa speaking in Parliament today noted that the World Health Organization has declared it as a global emergency. He noted that it is a sign of relief for them, that the Coronavirus has not affected any Sri Lankans. He said they must monitor the products and food items imported from China to Sri Lanka as well.

Premadasa stressed that a face mask mafia has now arisen. He noted that the government has imposed a maximum retail cap for face masks, but it is not effective. He pointed out it is the government’s responsibility to provide quality face masks to the general public. He added that they need a national plan and a strategy to address this issue. He proposed that a special task force is appointed to combat this issue.

He said they must also assess and try to quantify the possible damage this virus could cause for the local economy. Premadasa noted that 43 international airline companies have halted flights to China. He questioned that when such leading international organizations make such a decision, what measures will Sri Lankan airlines take?

Director-General of the WHO Tedros Adhanom said;

“The main reason for this declaration is not because of what is happening in China, but because of what is happening in other countries. Our greatest concern is the potential for the virus to spread to countries with weaker health systems and which are ill-prepared to deal with it.Let me be clear, this declaration is not a vote of no-confidence in China, on the contrary, WHO continues to have confidence in China’s capacity to control the outbreak. There is no reason for measures that necessarily interfere with international travel and trade. So WHO doesn’t recommend limiting trade and movement.”

The death toll stands at 213

The death toll stands at 213 and cases around the world have now risen to more than 9,700. The U.K. health department confirmed two cases of coronavirus in England, while the U.S. and Japan advised citizens to avoid travelling to China.

Apart from China, patients were reported from 22 other countries. The Japanese government is already telling its citizens not to take any trips to China’s central province of Hubei while Oman’s health ministry has advised against travel to China.

Authorities in Vietnam are introducing a temporary ban on issuing travel visas to Chinese tourists.

In a major blow to tourism in China, Kenya Airways, RwandAir, Vietnamese carrier Vietjet, Turkish Airlines suspended all flights to and from China until further notice with effect from today. At the same time, China’s Civil Aviation Authority announced that it will dispatch two Xiamen Airlines planes to fly Wuhan citizens back from Bangkok, Thailand, and Malaysia.

Unlikely heroes have arisen in China’s coronavirus crisis – a group of construction vehicles building two new hospitals in the city of Wuhan, where the outbreak emerged. The 25,000 square meter Huoshenshan Hospital in Wuhan will be ready by February 2nd. The Leishenshan Hospital will be in use by February 5.