Colombo (News 1st) – What is the BOND KINGS club?

The forensic audit reports of the Central Bank of Sri Lanka in relation to bond transactions that were carried out since 2002 have been made public. Former Chairman of COPE MP Sunil Handuneeti addressing a media briefing today made some startling revelations regarding the contents of the report.

He noted that criminal gangs involved in swindling money of the general public, function as one extended family in the Sri Lankan financial market and they take turns in coming under the guise of the UNP and the SLPP.

He reminded the public that there were many who attempted to undermine the forensic audit reports of the CBSL from the moment it was announced. One of the key figures involved in this, according to Handunetti was former Central Bank Governor Ajith Cabraal.

The JVP MP notes that a thorough examination of the audit reports would reveal why the former Governor would have attempted to discredit these reports.

Highlighting section 11.1.8 of the 1st forensic audit report, Handunetti noted that the relationships that both former Governors Cabraal and Arjuna Mahendran had with relatives involved in other primary dealerships have been laid bare. 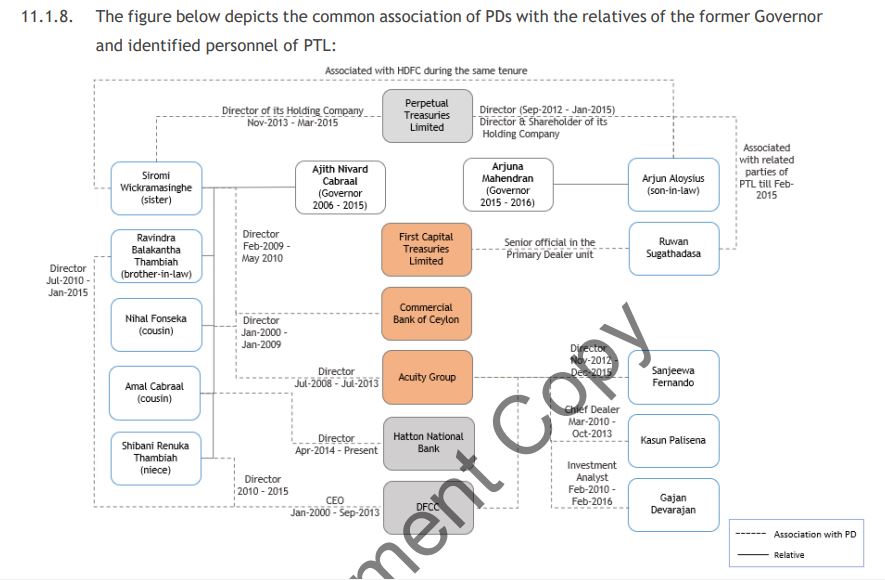 The JVP MP believes that both Cabraal and Mahendran, as well as the political powers that advised them, should be brought before the law. If the Government and President Gotabaya Rajapaksa are serious about their commitment to bringing the bond culprits to book, the CBSL Forensic audit reports have provided them with another starting point for such litigation, according to MP Handunetti.

The COPE report, Presidential Commission report as well as the 5th Forensic Audit report, all deal with the Mahendran-Aloysius financial scam, the MP stated.

In addition, to looking into the bond scam the Forensic Audits have also looked into the manner in which EPF funds were invested.

Handunetti stated that the reports reveal that EPF funds were invested in 19 companies and had caused a loss of over Rs 57.9 billion.

The JVP MP went onto claim that funds from the EPF were used for pumping and dumping schemes, adding that both the Cabraal extended family and the Mahendran extended family were linked to these investments. He went onto note that this would not have been possible without sufficient political protection.

Since 2002, Bonds to the value of almost Rs 5600 Billion have been issued. 90% of those bonds were issued to Non-Captive sources through Direct Placements. The MP noted that these transactions were conducted in a manner which ensured that the monetary board and the board of the CBSL were kept in the dark.

Finally, the MP laid down the gauntlet for the current administration.

“As Finance Minister, Prime Minister Mahinda Rajapaksa can start (legal proceedings) from the very beginning and work his way to the end, or the other way around ..”