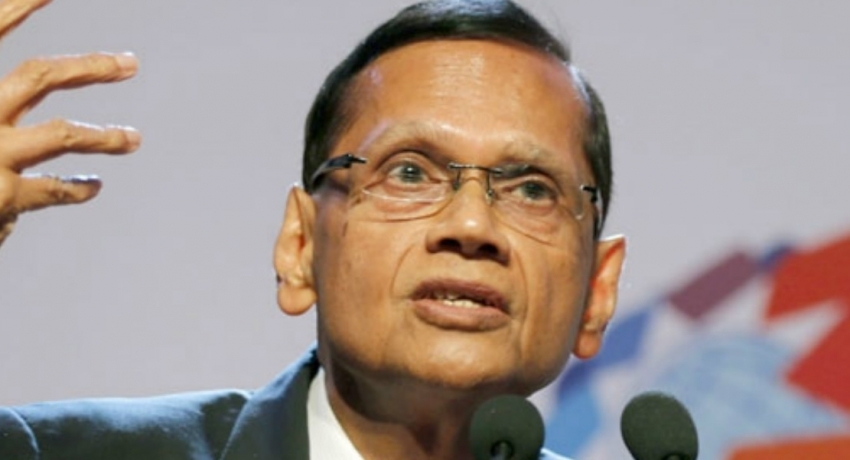 We will seek legal assistance to dissolve the parliament : Professor G.L. Peiris

We will seek legal assistance to dissolve the parliament : Professor G.L. Peiris

COLOMBO(News 1st) – Professor G.L. Peiris, Chairman of the SLPP and UPFA MP Rohitha Abeyagunawardena shared thoughts on the recent election and the government at a media briefing convened by the Sri Lanka Podujana Peramuna today (November 25).

“If this was a parliamentary election we would have won over 120 seats in parliament. Now, what is the most democratic course of action in this instance? Under these circumstances, we must come to an agreement within parliament to dissolve parliament and hold a general election and allow the people of this country to appoint new MPs to represent them.

But the party that has a majority in the current parliament says that they cannot do it. They say that they are against that. We see this is a waste of time. President Gotabaya Rajapaksa has said that we will not succumb to this.

We will continue to take steps to do everything legally possible, to dissolve parliament. We are deeply analyzing how we can achieve these aspirations of the people.”

UPFA MP Rohitha Abeyagunawardena firmly stated that the SLPP would win 2/3 majority in the parliament and they will get the mandate to change the 19th amendment which was falsely prepared.

MP responded that they would represent via an alliance.

“In my personal opinion, I prefer to contest under the symbol of the flower bud representing the SLPP. The symbol that is in the hearts of the people of the country is the flower bud. So we cannot remove the flower bud from the minds of the people, we will be able to get 150 seats in parliament, this is the opinion of Rohitha Abeyagunawardena” he added.

Vice-Chairman of the Sri Lanka Freedom party Thilanga Sumathipala responded to the statement made by MP Rohitha Abeyagunawardena.

“First, we will have to work as an alliance. There are 17 parties who are part of this alliance. All of the party leaders should be called and the alliance is established and the most suitable course of action is, no matter what anyone says 7 million people in the country have voted.

Sometimes we might contest under different symbols in some districts. In some districts, we will have to work with the aspirations of the people. We will work accordingly for the general election in order to get the maximum power in parliament.