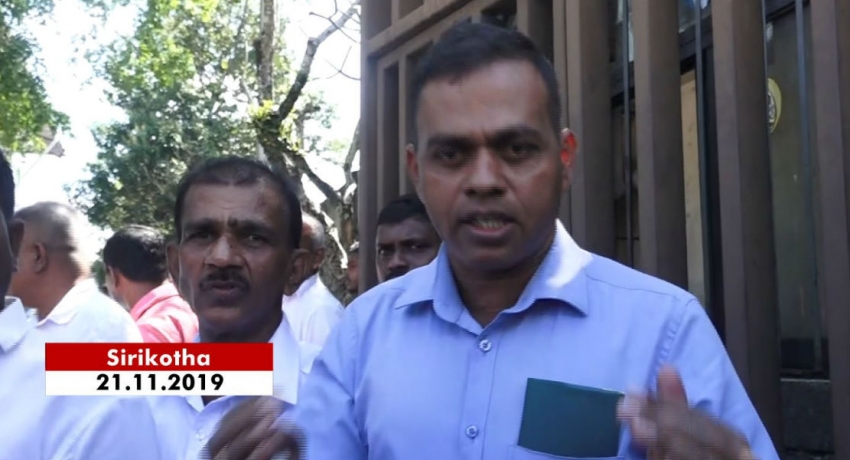 COLOMBO (News 1st) – Sajith Premadasa who had already planned to meet the public at Sirikotha, had to change plans and assemble at Vauxhall Street as Sirikotha was inaccessible.

Those who visited Sirikotha this morning were denied access to enter the party headquarters.

A number of supporters present at the scene expressed their disappointment in the current party leader and stated that he was responsible for the plight of the UNP and the defeat of the Minister Sajith Premadasa.

Journalist: Does he have any right to close this place?

“They have no right to close the headquarters of the UNP. The UNP voter base was created by the grass-root level and village level UNPers.

It is the UNPer who is disappointed today. They must resign. This is why the UNP lost for the past so many years. They did not let anyone enter. They did not allow a Pradeshiya Sabha MP to get on stage.

Why do we tolerate such leaders? Today, we are refrained from expressing our views at the party headquarters. This was the game played by the leader continuously.

He always says he will be the leader of the opposition. He is the leader who destroys the backbone of the party. After playing all the games, he is now hiding.

Akila Viraj Kariyawasam is another player in this game. These five individuals are operating this. They must be sent immediately. We want a new leader, or else we will surround this place.

This is not something they inherited from their parents. This is the people’s mandate.

Sajith Premadasa must be given leadership, at least from this point onward.”

A number of party supporters expressed their utter disappointment towards the current party leader Ranil Wickremesinghe.

“Ranil Wickremesinghe destroyed the UNP. He never punished the wrongdoers. We will bring Sajith Premadasa to power. We are sad about what happened.

UNP MP Dr Harsha de Silva stated that if the general secretary of the UNP Akila Viraj Kariyawasam wants the gates to Sirikotha to remain closed it will, however, it would make people forget Sajith Premadasa.

Meanwhile, a media briefing was convened at the operation office of the New Democratic Front in Vauxhall Street today.

UNP MP Thushara Indunil noted that they would follow Sajith Premadasa in the General elections as they would not want to retire from serving people and if not they would go home with dignity.

UNP MP Ashok Abeysinghe shared that they do not intend to rush into a general election as the UNP MPs would vote in favour of 2/3 majority. Therefore the President can dissolve the parliament in August 2020. MP added that they have 6 months left and believe that Sajith Premadasa would assume leadership.

MP Hirunika Premachandra stated that in order for democracy to prevail a strong opposition was necessary. She added that if they remain to act like they are now they would be ruined and would not able to secure the number of seats they require. She added that if Sajith Premadasa comes forward they could secure 80-90 around 100 seats.

Journalist: You spoke about the public mandate, can’t your leader comprehend this matter?

UNP MP Ashok Abeysinghe responded that he does, however, he is only human and these changes were necessary. He added that they would not resort to other avenues.

Journalist: They say that elections are approaching in 6 months. But Vajira Abeywardena says that they should rush into a general election

Certain MPs from the opposition was provided security from the government. Such individuals prefer to rush into a general election and move into the opposition.

There are more privileges when you are in the opposition. We will reveal them in the future. We cannot function like this. The United National Party cannot be destroyed like this”