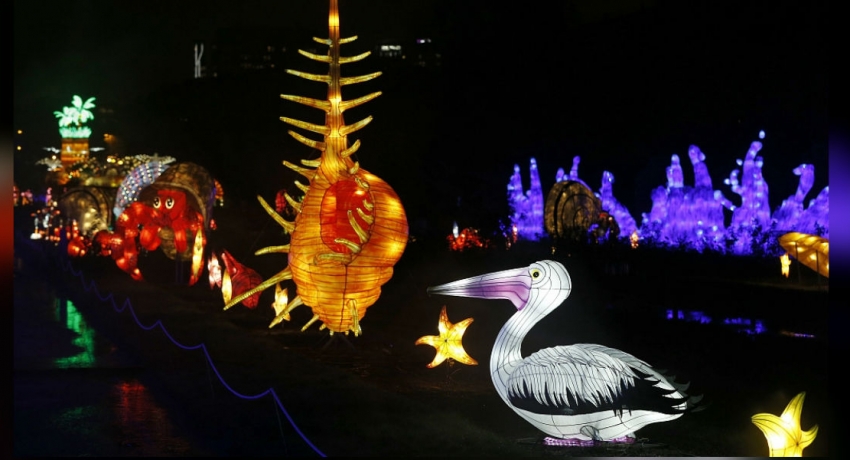 Under the sea: giant sea creature lanterns light up Paris

Under the sea: giant sea creature lanterns light up Paris

Orcas, great white sharks and even a deep-sea angler fish lit up the night in a colourful display. Visitors braved the rain and cold to see the illuminations, which are open to the public until January 19.

One of Paris’s many festive illuminations during the winter, the lanterns, which measure up to 30 metres long and 10 metres high, were created by the China Light Festival, a subsidiary of Sichuan Tianyu Culture, known for giant lantern displays to celebrate Chinese New Year.

Visitors can see 50 scenes ranging from tropical fish to creatures of the deep sea, ending with a display of wildlife from the north and south poles.

The light display is linked with the current exhibition at Paris’ Natural History Museum, which celebrates ocean wildlife and raising awareness of the threat of climate change on the oceans.

The director of the Paris Natural History Museum, Bruno David, told Reuters that the aim of the light display is to raise awareness of “pressures placed on the ocean which put it in danger. So to talk about the ocean through the beauty of the ocean.”

A report published in May by the Intergovernmental Science-Policy Platform on Biodiversity and Ecosystem Services (IPBES) found that up to one million of the world’s estimated eight million plant, insect and animal species is at risk of extinction, many within decades. The authors identified industrial farming and fishing as major drivers – with the current rate of species extinction tens to hundreds of times higher than the average over the last 10 million years.