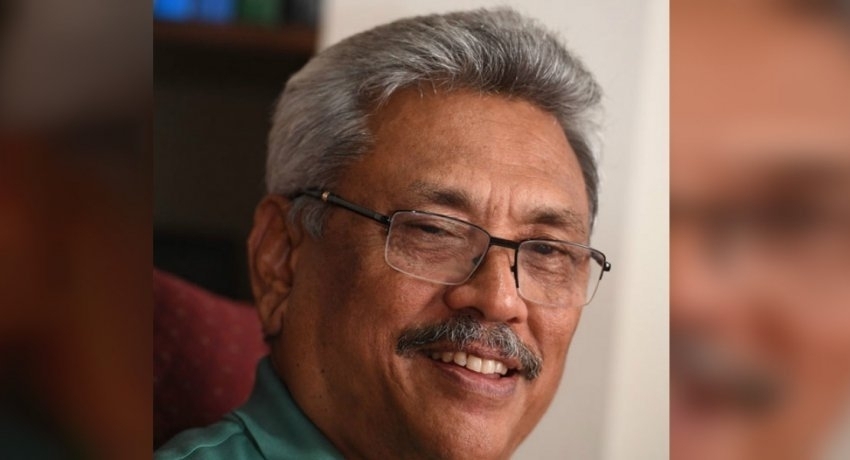 COLOMBO (News 1st):- The citizenship of the presidential candidate of the Sri Lanka Podujana Peramuna, Gotabaya Rajapaksa has made headlines once again. The topic came to the limelight once again following a tweet posted by Minister Harin Fernando last evening.  Lawyers appearing on behalf of Gotabaya Rajapaksa convened a media briefing today (November 10) to address the issue.

Presidential Election 2019 now officially a battle between a Sri Lankan Vs an American. SLPP candidate Gotabaya Rajapaksa’s name not in the list of names among those who renounced US Citizenship. #Sajith4President https://t.co/YF5jjjtiAJ pic.twitter.com/miuAR0dbzq

When inquired by News 1st regarding the matter the U.S Embassy Spokesperson said that the “We cannot comment on individual visa or citizenship issues.”

A fast calling for proof

Venerable Dr. Iguruwaththe Sumangala Thero this morning launched a hunger strike demanding that Gotabaya Rajapaksa prove that he has renounced his U.S citizenship. The fast is still continuing at the Independence square. The Venerable Thero has also publicly displayed the oath of allegiance that one has to swear when obtaining US citizenship.

Speaking to the media he stated;

Meanwhile, a resident of the Maligawatta area in Colombo also joined the fast.

Convening a media briefing today, the lawyers of Gotabaya Rajapaksa responded to the allegations regarding the presidential candidate’s US citizenship.

“For four years, they narrated the same story. Will Gotabaya Rajapaksa be nominated without renouncing his US citizenship? You know they sought a writ petition against Gotabaya Rajapaksa, claiming he was not a Sri Lankan citizen. This was to stop the nominations being presented. They produced a document that was taken from the CID. This is known as the P19 motion. This is not something that we presented. This was presented by them. They had attached the Loss of Citizenship or the renunciation certificate. They are well aware of this since the first week of September. The motion was filed on the basis that he did not posess a Sri Lankan citizenship  and that he had renounced his US citizenship.”

“What happens first if you need to renounce your citizenship is, you have to go to the embassy in Colombo and swear an oath… It says that the renunciation happens if this is accepted and approved by the State Department. This clearly states that this has been accepted on the 3rd of May 2019, he has been given what is called a certificate of loss of nationality of the United States. His citizenship is renounced not from the 3rd but from the 17th of April.”

Also speaking at the media briefing, President’s Counsel, Kushan De Alwis stated that he will claim with responsibility that there are no legal obstructions against Gotabaya Rajapaksa being elected and taking oaths as the next executive president of this country.

“This certificate renouncing US citizenship has been signed by Philip J. VanHorn from the US embassy. Mangala Samaraweera and Ranil Wickremesinghe can even call him and inquire about this. Venerable Inguruwaththe Sumangala Thero can take a look at these documents. While possessing such documents, they have misled you and persuaded you to launch a fast at the independence square. We can send these documents to Ven. Inguruwaththe Sumangala Thero.”

“They speak of a federal register. The federal register is similar to a gazette in Sri Lanka. The IRS is not very keen on including the names of those who renounced their citizenship in the gazette according to legal provisions. This is not something done by them, it is done by the state department. Therefore, even their website states, that certain names may not be included in the list even after six months or a year.”

“We do not know how many names in addition to Gotabaya Rajapaksa’s were not included in the list. These take place in different places. If the matter was dealt in the USA, it would have been processed immediately. But this took place in Sri Lanka, and therefore, it takes time for it to be processed and sent to the USA.”

Also responding to another inquiry made by a journalist as to how the general public could determine whether an individual renounced his US citizenship, Ali Sabry responded “how does the general public determine whether you are a citizen of Sri Lanka? If someones ask you this question, will you show them your birth certificate? You will only show your NIC to the relevant authorities. So in this context, who is the relevant authority? the national elections commission. So you give the documents to them.”

Speaking at a rally in Nochchiyagama, the Presidential candidate of the SLPP, Gotabaya Rajapaksa had this to say about his citizenship;

“During my speeches, I usually speak about my policies and how I will ensure national security and how I will uplift the economy of the country. But I have to warn you that on the 14th and 15th, during the time when election campaigns cannot be conducted, our opponents are getting ready to conduct a series of events to sling mud at me. I request you to not get deceived by these baseless allegations. This morning a Venerable Thero contacted me and questioned if there is an issue pertaining to my Dual Citizenship, I said that all those issues have been legally resolved. I questioned why the thero asking me this question. The thero said a minister from the opposition had made false statements about this. So at the face of defeat, they will continue to spread baseless and false rumors.”

“There are no certificates of proof needed for my citizenship, I’m an original Sri Lankan. A number one Sri Lankan. Even I received my education overseas. But in no way, did I lose my passport. I studied in England. I studied in the USA. But I never changed my Sri Lankan citizenship. I never sought dual citizenship. So what I have to say is on the 16th through the chance you get, vote for the original president. Original Sri Lankan. When I receive your support, all communities, all nationalities, all religions, everyone will be united. the whole nation will be united.”

“I condemn Facebook for censoring my posts regarding American citizenship of  Gotabaya Rajapaksa.  I stand by my every word.”

I condemn @facebook for censoring my posts regarding American citizenship of @GotabayaR. American companies shouldn’t interfere on behalf of an American contesting a SL 🇱🇰election.I stand by my every word.All my statements remain intact here on Twitter for ur reference @alisabry

Meanwhile, the New Democratic Front also made several comments with regard to the citizenship of Gotabaya Rajapaksa.

“The federal list is something that is equal to the Gazette. There is no fact to prove that he renounced his U.S. Citizenship. He has not even proved his Sri Lankan Citizenship anywhere either. Then the people of this country have to beg the question of whether it is a U.S. Citizen that is going to contest the Presidential Election. But neither Sajith Premadasa nor the party will challenge him legally by going to courts. According to the advice we have received, we will not challenge his dual citizenship in court. After his huge loss from the Election, the relevant authorities will investigate whether he renounced his U.S. Citizenship or not and the necessary legal action will be taken promptly. The United States uses situations like this to engage in International Politics. So the U.S. could have issued a statement regarding the situation of Gotabaya Rajapaksa. But they didn’t do that because they have Gotabaya on their leash and they are trying to get the control of the country under them. The U.S. can decide whether Gotabaya is still a citizen of their country. So Gotabaya has to live in fear of the U.S. He will have to do whatever the U.S. asks him to do.”

“Our opponent is an American. There’s a court case. The US has now filed a case. A verdict will be given the day after tomorrow. If they deceive the citizens and face the elections, what happened to Geetha will happen to him. Since he is an American and since he is attached to America, we do not know what America will do. That’s why he didn’t mention anything about the Millenium Challenge Corporation. They keep saying that they will review the future agreements. We challenge him to go before the media and say that he will not sign the Millenium Challenge Corporation compact.”