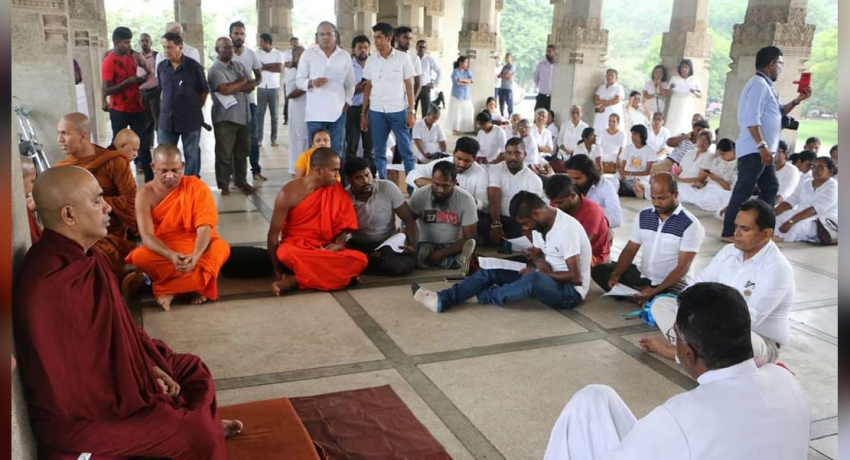 COLOMBO (News 1st) – The fast which was launched by Venerable Ududumbara Kashyapa Thero opposing the American Millenium Challenge Corporation Compact, was called off this morning.

The fast unto death was called off by the Thero following letters which were sent to him by the Prime Minister, Sajith Premadasa and Gotabaya Rajapaksa.

The Chief Incumbent of the International Vipassana Meditation Centre, Venerable Ududumbara Kashyapa Thero launched a hunger strike last morning at the Independence Square in Colombo, claiming that there is an attempt to sign the MCC Compact and calling for it to be rescinded immediately.

Tissa Attanayake arrived at the Independence Square, with a letter written by Presidential Candidate Sajith Premadasa on the MCC. The letter stated that the government will not sign the Millenium Challenge Corporation compact before the 16th of this month.

The letter further stated if the agreement is to be signed following the presidential polls, it will be done so after discussions in and out of Parliament and following discussions with the Maha Sanga. Sajith Premadasa in the letter also states that he will not enter into any agreement which is detrimental to the country.

Member of Parliament Bandula Gunawardena arrived at the Independence Square last evening, bearing a letter penned by Presidential Candidate Gotabaya Rajapaksa. The letter stated that all agreements signed by the current government, during the period after the declaring of elections, will be reconsidered.

He added that all agreements signed by the current government will be reassessed under the criteria of national security, national sovereignty and the requirements of the nation.

PM writes to the thero

Issuing a letter to Venerable Ududumbara Kashyapa Thero, Prime Minister Ranil Wickremesinghe said the there is no preparation to sign the Millenium Challenge Corporation Compact before the Presidential Election.

The Prime Minister noted that steps will only be taken after obtaining the opinions of all stakeholders and after holding discussions in parliament with regard to the draft bill.

“It disheartens me to say that, while we are attempting to make this decision on a national level, several political parties are trying to take advantage of this. Gotabaya Rajapaksa, in his letter, has requested me to call off the fast saying that my life should be protected.

That was not my intention. The intention was related to this government. This Government should have provided me with an answer and it has sent me one. It was from the Prime Minister’s Office. That letter was the reason why I called off the fast. Sajith Premadasa has sent a letter as well.

There was no point in me carrying out the fast. I managed to fulfil what I intended. However, we are not prepared to believe any of this. If a program that damages the country on a national scale is put forward and they break their promises, we will carry out something more organized than this.”