The NDF Presidential Candidate once again reminded the challenge he made to his opponent, Gotabaya Rajapaksa to participate in an open debate.

Addressing the masses gathered he said:

“I have, on many days, invited him. I have sent a letter as well. If you have a backbone come for an open debate with Sajith Premadasa. Some people can produce what someone else has written. They can bring bundles of books and present saying this is what we are going to do. They can present something someone else has done. Our opponent has also done the same thing. He has no clue about his policy statement. We can discuss all of this in a very disciplined, organized manner. We can hold a very intellectual debate where the whole country will be able to see this on all the television networks. The son of Ranasinghe Premadasa, Sajith Premadasa is ready for this. I am even ready to do this with 500 or 1000 people of my opponent. I will come alone. Social media is used to make various false claims. The networks that air false news tries to make them real. These false networks, edit certain clips and transmit it to the whole country. Remember this. They are doing this to make their candidate victorious. They have a personal agenda. We are ready to reveal those in the future. We will make these agendas of these media networks that spread false news, public. We will show the reality to the people of this country.”

He then arrived at the Mawathagama area for another public rally where he said:

“The students who receive a degree from the technical college, will receive the financial capital to commence new businesses, new employment opportunities, and self-employment opportunities. This is how we will create the digital revolution in the whole country. Through this digital revolution, we not only create an impact in Sri Lanka but in the world market as well. We will make Sri Lanka the number one country when it comes to the digital sector. We will commit ourselves to achieve this. Do not fear, my astrology and my stars are all good. The public will become victorious on the 16th.”

He then arrived at a public rally in Homagama last evening (October 26). The Presidential candidate, Sajith Premadasa speaking to the public said;

“Some may think that the same set of people who were here for 4 to 5 years will govern the country, we will topple this upside down. We will have a massive change. In this change, we will have a corruption-free, clean set of people. We will not do politics instead we will serve the people. Some may think we are doing this with the old people. I am not ready for that. There will be an untainted set of people to provide justice to the general public. I am not a person who can be suppressed. When I was being given the candidacy, many people attempted to suppress me, I said, give it without any conditions, or else keep it. I am not a person who would reach political deals with anyone.”

Also speaking at the event, Field Marshal Sarath Fonseka says that he will ensure to protect the sovereignty, integrity, security of the property, the government and the property of the government and that the will create a separate force to eradicate the drug menace.  He further says that they will have special training, and they will ensure that the drug menace will not raise its head again in the country and that in two months the country will feel how the drug menace is being controlled since they will eradicate it completely within two years. He added that there will be no room for terrorism in the country since the army and the forces will be strengthened to ensure this. 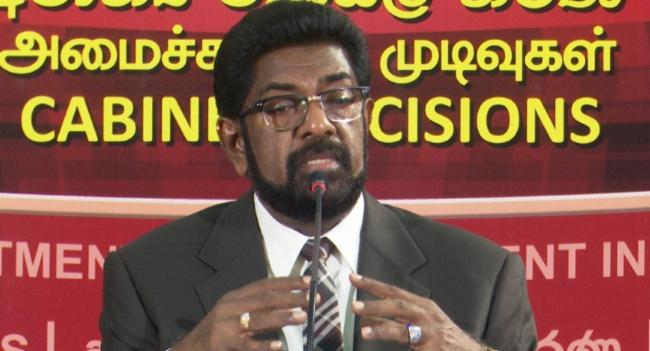