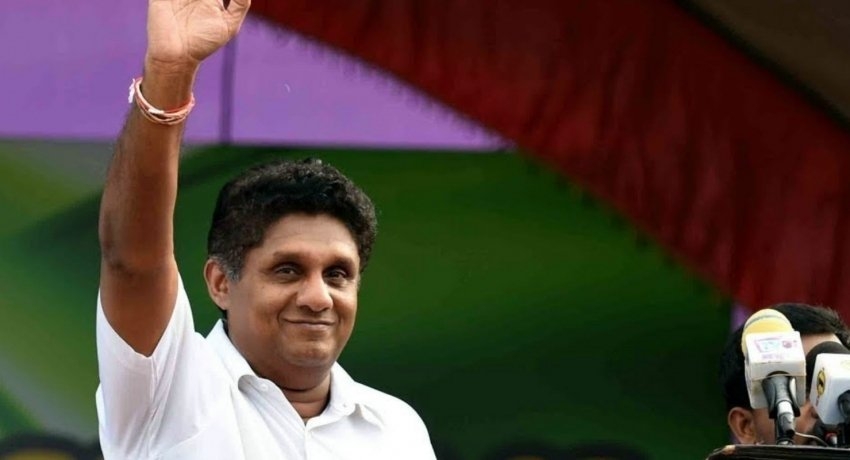 18.12 -“..This is a difficult journey that I have undertaken, I will disregard all these obstacles in my path. I thank all the people who put such challenges before me because it improves my temperament as a leader. No one can stop my journey.” – Sajith Premadasa

18.10 – “..My priority won’t be to get bulletproof vehicles or to expand my cabinet. My priority is to ensure that you receive the development that you deserve..” – Min. Sajith Premadasa

18.07 – We need to equip our military with the latest tech and get them out of menial tasks like cleaning streets or collecting garbage. ” – Min. Sajith Premadasa

17.54 – “.. I will not use the public mandate to benefit my self. So I ask you to place your faith and mandate in me and I promise that I will develop the country under a Sri Lanka First policy” – Sajith Premadasa

17.52 –“..Sajith Premadasa is the only candidate that comes forward to develop the country without any conditions or regulations being imposed on them. ” – Min. Sajith Premadasa

17.50 – “There are reports that say that Sajith bowed down to certain conditions. There is something I value more than the Presidency, that is my dignity. So if someone thinks that they can use me as a puppet they are wrong.” – Min. Sajith Premadasa

17.41 – “.. There is a wave of strikes happening right now. this is my promise to all the Government servants, we will resolve your issues when Sajith Premadasa is the President” – Min. Ajith P. Perera

17.10 – “..Even Mahinda Rajapaksa wants Sajith Premadasa to become the President of the country because if Gota is elected president Mahinda will never be able to control the party and Namal would never get a chance to contest..” – MP S.M. Marikkar

17.00 – “Sajith is someone who respects democracy that is why he remained in the party and never created factions or deserted the party” – Min. Harin Fernando

16.58 – “When we were preparing for the rallies in Matara, Badulla, and Kurunegala, it was raining. It was the same here. But even nature makes way for Sajith Premadasa because we were able to hold the rallies successfully” – Min. Harin Fernando

16.54 – “There is a group of good leaders around Sajith Premadasa who are ready to help him. This is our Golden era, by 2025 we can develop infrastructure in Sri Lanka to rival Singapore.” – Min. Sujeewa Senasinghe

16.41 – “Sajith Premadasa is a leader who can get things done. He showed what he could do with the housing ministry. If he was given the finance ministry or the petroleum ministry he could have shown the country much more” – Min. Sujeewa Senasinghe

16.36 – “The entire Rajapaksa family has already applied for US visas after news was released that Sajith will get the UNP candidacy.” – Min. Sujeewa Senasinghe

16.34 – “Gotabaya Rajapaksa fled the country during the war and hid like a coward. He returned to the country after his brother was elected the president to reap the benifits” – Min. Sujeewa Senasinghe

16.33- “Sajith Premadasa could have won the election in 2015 if he was given the opportunity, but despite our objections, our party rented a candidate” – Min. Sujeewa Senasinghe

16.27 – “I didn’t think that I would have to talk about a Rajapaksa during another election. But unfortunately, the SLPP has once again brought forward a corrupt Rajapaksa to contest the election” – Min. Sujeewa Senasinghe