COLOMBO (News 1st) – Several areas in the country continue to be battered by heavy rains and gale winds.

A number of low-lying areas were inundated after the Keselgamuwa Oya spilt over its banks at Bogowanthalawa, Hatton.

Twenty-three families living in Nagolla, Soranatota in Badulla were instructed to evacuate their houses due to a risk of falling earth embankments.

Our correspondent said, yesterday (September 16) earth embankments collapsed along with rocks from atop the Nasugala Hill damaging a house.

Low-lying areas in Udugama and Thawala were flooded after the Gin Ganga broke its banks.

Inclement weather forced fishermen to refrain from setting out to sea from Galle and Matara today.

He continued to state that showers or thundershowers will also occur in the coastal areas of the Western, Southern and South-Eastern parts of the country and wind speeds could increase to 60 to 70 kmph.

He further added that wind speeds can also increase to 60 kmph off the coast extending from Hambantota to Pothuvil and Puttlam to Mannar via Kankesanthurai. He finally added that there could be an escalation in this inclement weather by the 19th to the 20th of September. 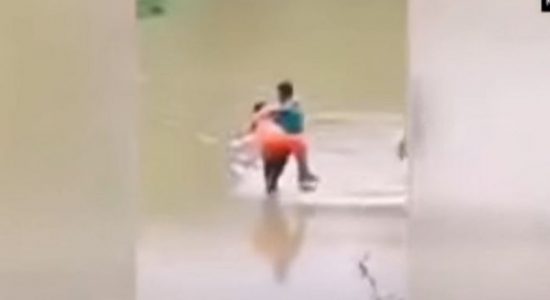