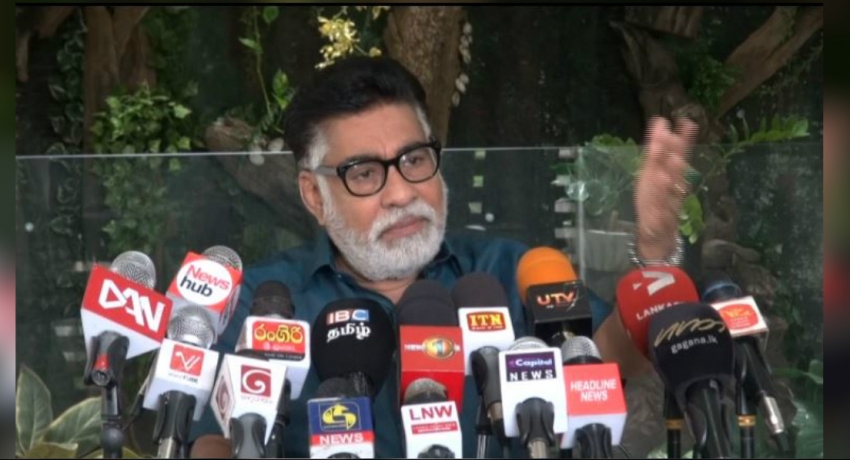 Gotabaya is bound to U.S terms for 10 years : Mervyn Silva

Gotabaya is bound to U.S terms for 10 years : Mervyn Silva

Colombo (News1st) – The national conference of the SLPP Youth Front was held at the Nelum Pokuna Theatre in Colombo today (24 August). Opposition Leader Mahinda Rajapaksa, SLPP Presidential candidate Gotabaya Rajapaksa, National Organizer of the Party Basil Rajapaksa and others were present at the event.

Journalists had the opportunity to question Gotabaya Rajapaksa at this event.

A question was raised regarding his resolutions for the issues of the estate workers, living cost, education, and those who lack houses.

In response to this Presidential Candidate SLPP, Gotabaya Rajapaksa suggested a method to provide job opportunities in the same area they live in and increase their income should be established adding that if discussions are held with committees and a methodology to distribute income is implemented it will be better.

Another question was raised regarding his intentions on implementing a program for the youth who cannot succeed simply by the wage they earn, to which he replied that we should figure out how to turn the youth into entrepreneurs.

Journalists raised a question regarding his plans for the issues faced by the people of North and North-East.

Gotabaya requested the youth of the country to join them in the journey of moving forward as a country in response to their question adding that he has served the North well, the Provincial council and the elections, back then, prior to the time when their government was in power. He mentioned that he had provided weapons to friendly groups to battle L.T.T.E terrorists. However, in order to hold a just and democratic election, they had to collect the weapons back.

He highlighted that the economy of a country cannot be developed if national security is not prioritized, in response to a question directed regarding his plans on eliminating terrorism which arose due to extremism.

Leader of the SLPP former President Mahinda Rajapaksa emphasized that the youth should remember that if the law was enacted on those who murdered the youth back then, there would not be any leaders or ministers to run this government. He further noted that “us who then saved the youth are troubled today, that is politics”. He noted that they fought, risked their lives and brought peace to this country. “That peace, that freedom we brought is used against us”, he continued.

These are some views expressed during a media briefing about Gotabaya Rajapaksa’s candidacy and his American citizenship.

Former Minister Mervyn Silva reasoned that if they think that national security is important they should appoint an army commander as their candidate. “How can a Colonel who left two experts like Wijaya Muniratne and Denzil Kobbakaduwa ensure the security of the nation?”, he continued. He referred to Mahesh Senanayake who retired recently suggesting that he be invited. He highlighted that a country cannot be governed by just national security adding there are way better war heroes such as Shavendra Silva.

Journalists raised a question regarding the possibility of Gotabaya Rajapaksa’s citizenship issue eventually resurfacing despite his claims of having it resolved.

Mervyn Silva presented a US document relating to the citizenship issues discussed. He stated that even though his citizenship is renounced he has to live according to what the US wants for 10 years as per the document.

“He will not become the President. If this happens he will be a Professor in the white van culture” he continued.
He revealed that  Nalaka Hewa made a deal with the Rajapakse’s in exchange for a huge commission that should have been given to the defence secretary. He continued that they were asked about the money and was said that it was given to a member of the Rajapaksa family.” He was in danger and he went abroad with the President. I also went with Sajith. I do not know what happened to the money later”, he continued.
He further mentioned that they wanted to bring their relative Udayanga Weeratunga, who he claimed as the leader of the MiG deal, before the presidential election.
Mervyn Silva reasoned that Gotabhaya has to deal with the US for 10 years, share all secrets with the US, sign weapon agreements with the US and is mandated to behave according to what the US wants for 10 years. He further noted that according to the document if there will be any kind of war in the US he has to support that war. He further took responsibility for his claims made as per the US document. “Now the joint opposition is saying that the UNP is making deals with the US. First of all, you should stop appointing a US citizen as Sri Lanka’s presidential candidate. Don’t they have other politicians to appoint as a candidate?”, he continued.

Leader of the United Socialist Party, Siritunga Jayasuriya questioned the assurance people have regarding Gotabaya renouncing his citizenship. He stated that he does not believe that Gotabaya would win. He further reasoned that if Gotabaya Rajapaksa does win, for the first time in Sri Lankan history, the country’s first lady would be a US citizen. He highlighted that his wife had not renounced her US citizenship and is still a US citizen. “The President would be Sri Lankan while the First Lady would be American”, he continued.