COLOMBO (News 1st) –  The Department of Irrigation stated that the water levels of the Kalu and Gin gangas are likely to rise due to the heavy rainfall experienced in the South Western parts of the Island.

Director of Water Management of the Department of Irrigation, Mala Alawathuwala speaking to News 1st noted that water level of the Kalu ganga has already reached a caution level in the Muwagama area.

She added that locals should also be vigilant regarding the water levels of the Gin ganga.

Meanwhile, a warning level 1, Landslide Early Warning has been issued to several areas in the Nuwara-Eliya and Ratnapura Districts.

The Disaster Management Centre has requested locals to be vigilant for possible landslides and ground settlements.

The Disaster Management Centre (DMC) said spill gates of the Laxapana, Canyon and Kotmale reservoirs were opened yesterday(August 11) following heavy rainfall experienced in catchment areas on the Western slopes of the central hills.

The DMC requests the general public to be extra vigilant when using the Mahaweli and Kelani rivers.

Meanwhile, with the prevailing adverse weather conditions, two houses in the Midfield Estate in Dimbula were damaged, after a massive rock and mass of earth collapsed.

News 1st correspondent said that two women who were inside the houses at the time of the disaster had sustained injuries and were admitted to the Dickoya General Hospital.

Following the incident, this area has been identified as a landslide-prone area. Our correspondent added the police and pradeshiya sabha have taken steps to evacuate locals from the area immediately.

Two shops in the Ginigathhena area were damaged after a mass of earth collapsed on to them. He further added that another five shops in the area, are prone to damages due to possible landslides.

Pradeep Kodippilli, the Assistant Director of the DMC elaborated further into the matter.

He went on to note that strong winds between 70-80 kmph could be expected in the coastal areas apart from Potuvil and Trincomalee and with strong winds, rough seas could follow.

At a time when South Western parts of the Island are battered by heavy rains, other areas of the country are experiencing dry weather conditions.

The water level of the Senanayake Samudra in Ampara had decreased considerably prompting authorities to suspend issuing water for agricultural purposes.

Our correspondent said that the Water level of the Senanayake Samudra has reduced to 12,500 ft from its average level of 77,000 ft. 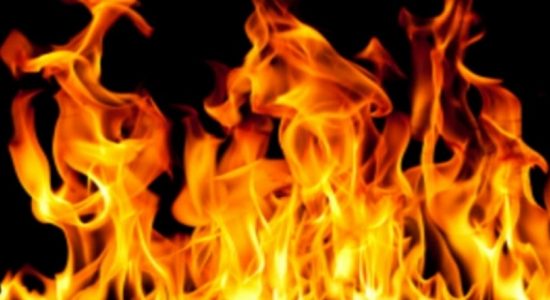