Colombo (News 1st): Objections have been voiced against a statement made by Minister Daya Gamage yesterday (June 19).

While distributing Samurdhi benefits in Homagama, the minister criticized the manner in which Colombo District Secretary Sunil Kannangara served in Ampara.

“During the 2008 provincial council elections, the meeting was held in Ampara. Sunil Kannangara was serving in Ampara then and there were around 40 – 50 Police officers. The police officers were suddenly removed. A bomb exploded 1 and a half kilometres away from the army checkpoint where 24 were killed. Five from my factory were also killed. I received a call from a close associate of mine from Temple Trees on the day of the elections. I was told that there’s a threat to my life and I was warned to be careful. Thirty seconds after I left my father’s shop, a bomb exploded; twenty-one were killed. A day before the elections, the total ballots was supposed to be 1008, but when it was counted, there were more than 1100. Sunil Kannangara signed all of them and managed to bring victory to Mahinda Rajapaksa. This is the real truth.”

State employees had organized multiple protests at several locations, in connection with the allegations raised by Minister Daya Gamage.

Additional District Secretary of Colombo K. C. Niroshan noted that in 2008, a ballot petition was presented in this regard, by the same minister, however, concealing the fact that it was rejected by the court, he provided false information, and after 10 years, he is criticizing the district officer in public. He noted that they will never handle elections based on any political party.

Another protest was staged opposite the Homagama divisional secretariat, against the statement made by Minister Daya Gamage regarding the district secretary.

Meanwhile, issuing a press release the Sri Lanka Administrative Service Association has condemned the statement made by Minister Daya Gamage regarding the District Secretary of Colombo, Sunil Kannangara.

It adds that Minister Daya Gamage’s degrading statement on Sunil Kannangara should be withdrawn.

The Association further adds that a code of ethics for public representatives must be introduced immediately, and strict disciplinary action must be taken when one fails to follow this. 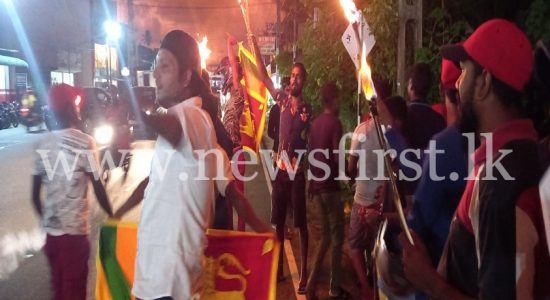